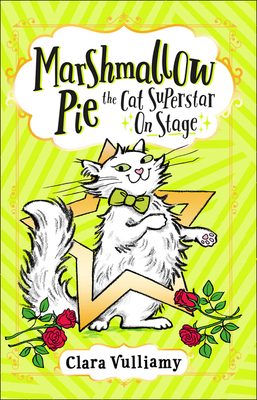 The fourth book in the Marshmallow Pie the Cat Superstar series by Clara Vulliamy, the author-illustrator of Dotty Detective

After his success on the silver screen, Marshmallow Pie - a big, fluffy cat with an even bigger personality - has an exciting opportunity to act on stage in a grand theatre. It will be his first time in front of a live audience

The bad news is, he has to share the stage with his unbearable neighbour and arch-enemy, Buster the dog. Pie is convinced Buster is out to ruin it for him But there's a mystery to solve both on the stage and off, and Pie's refusal to trust Buster could have some unexpected consequences . . .

Told in the hilarious voice of Marshmallow Pie himself, his antics are illustrated throughout in black and white.

Clara Vulliamy was born in London and studied at Chelsea School of Art, The Ruskin and the Royal Academy. She is the daughter of the celebrated author-illustrator Shirley Hughes and began illustrating picture books when she had her own children. She has since written and illustrated many stories, sometimes collaborating with her mother. She lives in Twickenham, with her husband and their daughters, Leah and Martha.