The Campaigns of Napoleon (Hardcover) 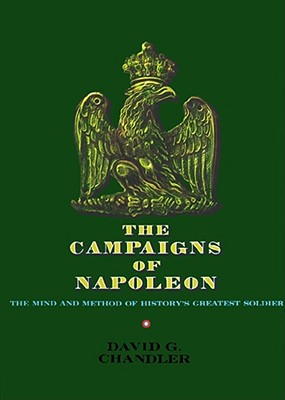 The Campaigns of Napoleon (Hardcover)


Special Order—Subject to Availability
In this “engrossing,” (The New Yorker) vivid, and intensively researched volume, esteemed Napoleon scholar David Chandler outlines the military strategy that led the famous French emperor to his greatest victories—and to his ultimate downfall.

Napoleonic war was nothing if not complex—an ever-shifting kaleidoscope of moves and intentions, which by themselves went a long way towards baffling and dazing his conventionally minded opponents into that state of disconcerting moral disequilibrium which so often resulted in their catastrophic defeat.

The Campaigns of Napoleon is a masterful analysis and insightful critique of Napoleon's art of war as he himself developed and perfected it in the major military campaigns of his career. Napoleon disavowed any suggestion that he worked from formula (“Je n'ai jamais eu un plan d'opérations”), but military historian David Chandler demonstrates this was at best only a half-truth. To be sure, every operation Napoleon conducted contained unique improvisatory features. But there were from the first to the last certain basic principles of strategic maneuver and battlefield planning that he almost invariably put into practice. To clarify these underlying methods, as well as the style of Napoleon's fabulous intellect, Chandler examines in detail each campaign mounted and personally conducted by Napoleon, analyzing the strategies employed, revealing wherever possible the probable sources of his subject's military ideas.

“Writing clearly and vividly, [Chandler] turns dozens of persons besides Napoleon from mere wooden soldiers into three- dimensional characters” (The Boston Globe) and this definitive work is “a fine book for the historian, the student, and the intelligent reader” (The New York Review of Books).
David G. Chandler is Head of the Department of War Studies at the Royal Military Academy, Sandhurst, and a Fellow of both the Royal Historical and the Royal Geographical societies. He is President of the British Commission for Military History and a Vice- President of the Commission International d'Histoire Militaire.

During his researches for The Campaigns of Napoleon, Mr. Chandler made considerable use of primary sources—including the thirty-two volumes of Correspondence de I'Empereur Napoleon Iier —and consulted many contemporary memoirs and military commentaries. (This he did with some caution, for such material is often far from reliable.) He also examined many of the most revealing and interesting studies that have been written by soldiers and scholars over the past 145 years, and he incorporated extracts from recently discovered sources in the hope of illuminating still further the well- trodden paths of Napoleonic studies.

The author of a dozen works on early eighteenth-and early nineteenth-century military history, David G. Chandler is a recognized authority in the Marlburian and Napoleonic periods. His other publications include A Dictionary of the Napoleonic Wars, 1979, Waterloo—The Hundred Days, 1980, An Atlas of Military Strategy, 1980, and Napoleon's Marshals, (editor), 1987. He has also contributed a chapter to Volume VI of the New Cambridge Modern History as well as numerous articles and reviews to magazines and journals. Chandler lives in Yately, Hampshire, England.
Eliot Fremont-Smith Books of the Times A massive and absorbing -- one is tempted to say definitive -- account and detailed analysis of the military career of Napoleon....The descriptions of the battles -- all the important ones, and all augmented by superb position maps -- have perhaps never been done with greater clarity.

The New York Review of Books Chandler can hold up his head with the best of them. His prose is as clear as his intellect....his scholarship is excellent...this is a fine book for the historian, the student, and the intelligent reader.

Los Angeles Times Chandler's analysis is so thorough that there is hardly an area untouched.

The New Yorker The book is engrossing, and...amounts to a first-rate general account of Europe in the Napoleonic era....brilliant, unremittingly attentive to detail and sparkling with insights into a man, a nation, and an epoch.

John Barkham Book Week In every way...a pleasure to read...a remarkable work which comes as close to dissecting the ingredients of Napoleon's military genius as any I have read...[it is] that rare combination -- a book impeccable in its expertise, penetrating in its analysis, and attractive in its presentation. No matter how numerous your books on Napoleon, make room for this one.

St. Louis Post-Dispatch Few works equal the scope and scholarship of Chandler's The Campaigns of Napoleon...a masterpiece in the truest sense of what military history ought to be.