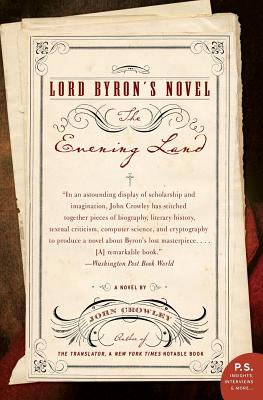 One of our most accomplished literary artists, John Crowley imagines the novel the haunted Romantic poet Lord Byron never penned ...but very well might have. Saved from destruction, read, and annotated by Byron's own abandoned daughter, Ada, the manuscript is rediscovered in our time -- and almost not recognized. Lord Byron's Novel is the story of a dying daughter's attempt to understand the famous father she longed for -- and the young woman who, by learning the secret of Byron's manuscript and Ada's devotion, reconnects with her own father, driven from her life by a crime as terrible as any of which Byron himself was accused.

John Crowley lives in the hills of northern Massachusetts with his wife and twin daughters. He is the author of ten previous novels as well as the short fiction collection, Novelties & Souvenirs.

“[An] intricate and stylish romp . . . both a Gothic extravaganza and a picaresque adventure.” — New York Times Book Review

“One of 2005’s most accomplished novels.” — Washington Times