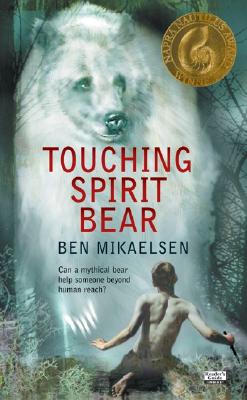 This is book number 1 in the Spirit Bear series.

In his Nautilus Award-winning classic Touching Spirit Bear, author Ben Mikaelson delivers a powerful coming-of-age story of a boy who must overcome the effects that violence has had on his life.

After severely injuring Peter Driscal in an empty parking lot, mischief-maker Cole Matthews is in major trouble. But instead of jail time, Cole is given another option: attend Circle Justice, an alternative program that sends juvenile offenders to a remote Alaskan Island to focus on changing their ways. Desperate to avoid prison, Cole fakes humility and agrees to go.

While there, Cole is mauled by a mysterious white bear and left for dead. Thoughts of his abusive parents, helpless Peter, and his own anger cause him to examine his actions and seek redemption—from the spirit bear that attacked him, from his victims, and, most importantly, from himself.

Ben Mikaelsen paints a vivid picture of a juvenile offender, examining the roots of his anger without absolving him of responsibility for his actions, and questioning a society in which angry people make victims of their peers and communities. Touching Spirit Bear is a poignant testimonial to the power of a pain that can destroy, or lead to healing.

A strong choice for independent reading, sharing in the classroom, homeschooling, and book groups.

Ben Mikaelsen is the winner of the International Reading Association Award and the Western Writers of America Spur Award. His novels have been nominated for and won many state reader's choice awards. These novels include Red Midnight, Rescue Josh McGuire, Sparrow Hawk Red, Stranded, Countdown, Petey, and Tree Girl. Ben's articles and photos appear in numerous magazines around the world. Ben lives near Bozeman, Montana, with his 700-pound black bear, Buffy.

"[Cole's] solitary life on the island is just the ticket for Paulsen fans, who will appreciate the survival story." — The Bulletin

“An excellent companion to Gary Paulsen’s Hatchet and Allan Eckert’s Incident at Hawk’s Hill.” — ALA Booklist

“[Cole’s story] will fascinate young and old, and have everyone waiting for the sequel.” — Voice of Youth Advocates (VOYA)