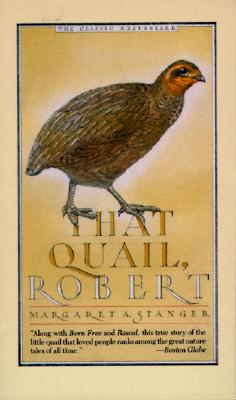 He’ll never live, the neighbors all said. But Robert, the abandoned quail chick would prove them wrong. Born on a kitchen counter in a house on Cape Cod, raised in a box surrounded by a lamb’s wool duster and a small lamp, Robert’s life began auspiciously.

Born on Cape Cod at Falmouth, Massachusetts, Margaret A. Stanger grew up in her pioneer parents' home in Iowa. With a B.A. from Grinnell College and an M.A. from Columbia University (where she also studied law), Miss Stanger was graduated from Boston Children's Hospital as a registered nurse. She returned to the Cape to live in Orleans, where she became one of Robert's closest human friends. Illustrator Cathy Baldwin, another friend and neighbor of Robert's, graduated from the Rhode Island School of Design.

“Along with BORN FREE and RASCAL, this true story of the little quail that loved people ranks among the great nature tales of all time.” — Boston Globe

“Robert revealed to those about her (he turned out to be a she) that there is indeed a universal language that all life shares. It is called love.” — Los Angeles Herald Examiner

“Captivating, charming, incredible, poignant. . . . At the end one has met and come to love a wild, shy, natural denizen of the fields and woods almost as a human friend.” — Nashville Banner

“Enthralling. … No one who has had a pet or watched a bird could fail to be enchanted. … Highly recommended.” — Library Journal