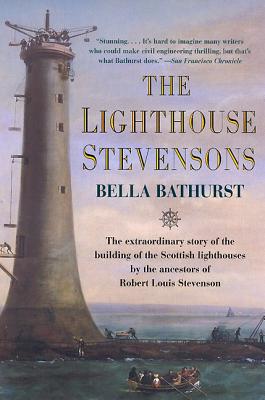 For centuries the seas around Scotland were notorious for shipwrecks. Mariners' only aids were skill, luck, and single coal-fire light on the east coast, which was usually extinguished by rain. In 1786 the Northern Lighthouse Trust was established, with Robert Stevenson appointed as chief engineer a few years later. In this engrossing book, Bella Bathhurst reveals that the Stevensons not only supervised the construction of the lighthouses under often desperate conditions but also perfected a design of precisely chiseled interlocking granite blocks that would withstand the enormous waves that batter these stone pillars. The same Stevensons also developed the lamps and lenses of the lights themselves, which "sent a gleam across the wave" and prevented countless ships from being lost at sea.

While it is the writing of Robert Louis Stevenson that brought fame to the family name, this mesmerizing account shows how his extraordinary ancestors changed the shape of the Scotland coast against incredible odds and with remarkable technical ingenuity.

Bella Bathurst is a freelance journalist. She divides her time between London and Scotland.