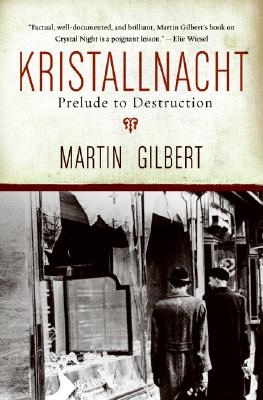 In the early hours of November 10, 1938, Nazi storm troopers and Hitler Youth rampaged through Jewish neighborhoods across Germany, leaving behind them a horrifying trail of terror and destruction. More than a thousand synagogues and many thousands of Jewish shops were destroyed, while thirty thousand Jews were rounded up and sent to concentration camps. Kristallnacht—the Night of Broken Glass—was a decisive stage in the systematic eradication of a people who traced their origins in Germany to Roman times and was a sinister forewarning of the Holocaust.

With rare insight and acumen, Martin Gilbert examines this night and day of terror, presenting readers with a meticulously researched, masterfully written, and eye-opening study of one of the darkest chapters in human history.

Martin Gilbert is Winston Churchill's biographer and the author of eight acclaimed books on the Holocaust. He lives in London.

“Searing and specific. . . a well-written survey of a turning point in modern history.” — Kirkus Reviews

“A powerful account of the helplessness of the Jews.” — Booklist