Their Heads Are Green and Their Hands Are Blue: Scenes from the Non-Christian World (Paperback) 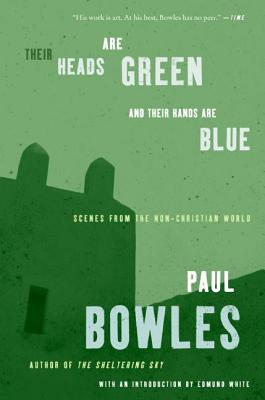 Their Heads Are Green and Their Hands Are Blue: Scenes from the Non-Christian World (Paperback)

Their Heads are Green, Their Hands are Blue deals largely with places in the world that few Westerners have ever heard of, much less seen—places as yet unencumbered by the trappings, luxuries, and corruptions of modern civilization. Bowles is a sympathetic and discerning observer of these alien cultures, and his eyes and ears are especially alert both to what is bizarre and what is wise in the civilizations in which he settles.

Above all, Bowles is a superb and observant traveler—a born wanderer who finds pleasure in the inaccessible and who cheerfully endures the concomitant hardships with resourcefulness, insight, and humor.

Paul Bowles was born in 1910 and studied music with composer Aaron Copland before moving to Tangier, Morocco. A devastatingly imaginative observer of the West's encounter with the East, he is the author of four highly acclaimed novels: The Sheltering Sky, Let It Come Down, The Spider's House, and Up Above the World. In addition to being one of the most powerful postwar American novelists, Bowles was an acclaimed composer, a travel writer, a poet, a translator, and a short story writer. He died in Morocco in 1999.