The Great Gamble: The Soviet War in Afghanistan (Hardcover) 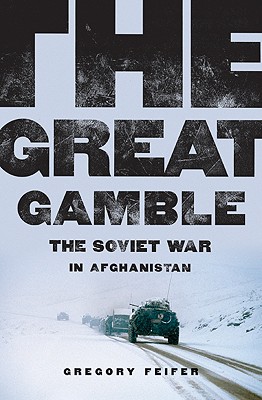 The Great Gamble: The Soviet War in Afghanistan (Hardcover)

In The Great Gamble, a groundbreaking account of the Soviet invasion of Afghanistan, former NPR Moscow correspondent Gregory Feifer vividly depicts the war that contributed greatly to the demise of the USSR, and that offers striking lessons for the 21st century, as well. Told from the perspective of the Russians who fought it, The Great Gamble offers valuable insight into the history of Afghanistan’s troubled government and the rise of the Mujahideen and Al-Qaeda. In the words of the Minneapolis Star Tribune, “Feifer has done truly extraordinary research… For all its heft, [The Great Gamble] is an effortless read—an unusual and gratifying combination.”

Gregory Feifer is the former Moscow correspondent for National Public Radio. He was educated at Harvard University and lives in Prague with his wife, Elizabeth, and son, Sebastian.

“This is a provocative and important book, telling us what the Soviet military was thinking and feeling as it lost its war in Afghanistan. Gregory Feifer vividly shows that their campaigns there amounted to a manual of how not to do it.”
— Thomas Ricks, author of Fiasco and The Gamble

“Feifer’s thoughtful, deliberative use of eyewitness testimony gives an intensely close-up sense of what the war was like for those who fought it.”
— Kirkus Reviews

“Feifer brings to life in spirited detail the bloody, eight-year struggle that killed a million Afghans and tens of thousands of Russians and broke the back of the Soviet Union, which disappeared within two years of the war’s end. You think it can’t happen to us? Read Feifer.”
— Thomas Powers, author of Heisenberg’s War

“Tracing the arc of the Soviets’ military disillusionment in Afghanistan, Feifer, who is an NPR reporter in Moscow, provides essential historical background to the present war in Afghanistan.”
— Booklist