Grant and Sherman: The Friendship That Won the Civil War (Paperback) 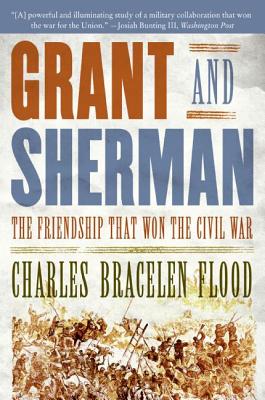 Grant and Sherman: The Friendship That Won the Civil War (Paperback)

They were both prewar failures—Grant, forced to resign from the Regular Army because of his drinking, and Sherman, holding four different jobs, including a much-loved position at a southern military academy—in the years before the firing on Fort Sumter. They began their unique collaboration ten months into the war, at the Battle of Shiloh, each carefully taking the other's measure. They shared the demands of family life and the heartache of personal tragedy. They shared similar philosophies of battle, employed similar strategies and tactics, and remained in close, virtually daily communication throughout the conflict. They were incontestably two of the Civil War's most important figures, and the deep, abiding friendship they shared made the Union's ultimate victory possible.

Poignant, riveting, and elegantly written, Grant and Sherman is a remarkable portrait of two extraordinary men and a singular friendship, forged on the battlefield, that would change the course of history.

Charles Bracelen Flood is the author of Lee: The Last Years; Hitler: The Path to Power; and Rise, and Fight Again: Perilous Times Along the Road to Independence, winner of an American Revolution Round Table Award. He lives with his wife on a farm in Richmond, Kentucky.

“Grant and Sherman...captures both the glory and the sorrow of comrades parting after a long ordeal.” — Mike Pride, Baltimore Sun

“[A] powerful and illuminating study of a military collaboration that won the war for the Union.” — Josiah Bunting III, Washington Post