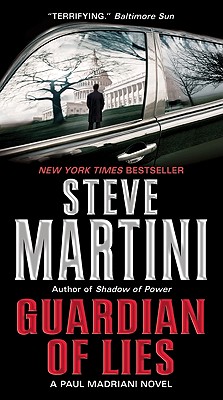 This is book number 10 in the Paul Madriani Novels series.

“The sort of compulsive page-turner that keeps readers up at night….Both timely and scary….Guardian of Lies more than satisfies.”

Defense attorney Paul Madriani is caught in a web of deceit and murder involving Cold War secrets, a rare coin dealer who once worked for the CIA, and a furious assassin in Guardian of Lies, the most entertaining novel yet in the New York Times bestselling series. Steve Martini, #1 bestselling author of Shadow of Power, Double Tap, and other acclaimed Madriani thrillers, demonstrates once again why he’s one of the genre’s masters, along with John Grisham, David Baldacci, James Patterson, John Lescroart, Brad Meltzer, and Scott Turow.

Steve Martini is the author of numerous New York Times bestsellers, including The Enemy Inside, Trader of Secrets, The Rule of Nine, Guardian of Lies, Shadow of Power, Double Tap, and others featuring defense attorney Paul Madriani. Martini has practiced law in California in both state and federal courts and has served as an administrative law judge and supervising hearing officer. He lives in the Pacific Northwest.