Rumi: Bridge to the Soul: Journeys into the Music and Silence of the Heart (Hardcover) 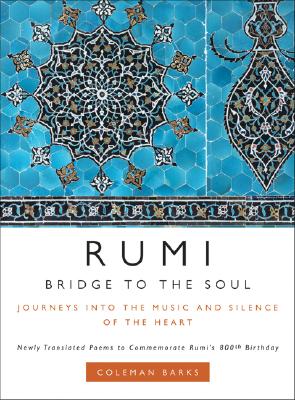 Rumi: Bridge to the Soul: Journeys into the Music and Silence of the Heart (Hardcover)

Originally released in 2007, "Year of Rumi," to coincide with the poet's 800th birthday, by the pre-eminent Rumi poet Coleman Barks.

In Rumi: Bridge to the Soul, Coleman Barks—who holds an honorary doctorate in Persian language and literature by the University of Tehran for his decades-long translations of Rumi—has collected and translated ninety new poems, most of them never published before in any form. The "bridge" in the title is a reference to the Khajou Bridge in Isphahan, Iran, which Barks visited with Robert Bly in May of 2006—a trip that in many ways prompted this book. The "soul bridge" also suggests Rumi himself, who crosses cultures and religions and brings us all together to listen to his words, regardless of origin or creed.

Open this book and let Rumi's poetry carry you into the interior silence and joy of the spirit, the place that unites conscious knowing with a deeper, more soulful understanding.

Coleman Barks is a renowned poet and the bestselling author of The Essential Rumi, Rumi: The Big Red Book, The Soul of Rumi, Rumi: The Book of Love, and The Drowned Book. He was prominently featured in both of Bill Moyers' PBS television series on poetry, The Language of Life and Fooling with Words. He taught English and poetry at the University of Georgia for thirty years, and he now focuses on writing, readings, and performances.