Righting the Mother Tongue: From Olde English to Email, the Tangled Story of English Spelling (Paperback) 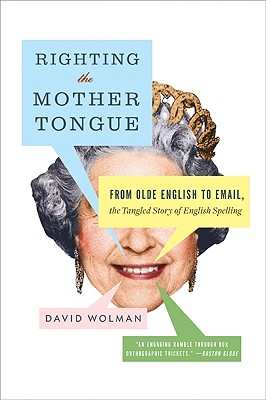 Righting the Mother Tongue: From Olde English to Email, the Tangled Story of English Spelling (Paperback)

When did ghost acquire its silent h? Will cyberspace kill the one in rhubarb? And was it really rocket scientists who invented spell-check?

In Righting the Mother Tongue, author David Wolman tells the cockamamie story of English spelling, by way of a wordly adventure from English battlefields to Google headquarters. Along the way, he joins spelling reformers picketing the national spelling bee, visits the town in Belgium—not England—where the first English books were printed, and takes a road trip with the boss at Merriam-Webster Inc. Wolman punctuates the journey with spelling wars waged by the likes of Samuel Johnson, Noah Webster, Theodore Roosevelt, and Andrew Carnegie.

Rich with history, pop culture, curiosity, and humor, Righting the Mother Tongue explores how English spelling came to be, traces efforts to mend the code, and imagines the shape of tomorrow's words.

DAVID WOLMAN is a Contributing Editor at Outside. He has written for the Wired, the New York Times, New Yorker, Nature, and many other publications, and his work has been anthologized in the Best American Science and Nature Writing series. He is the author of The End of Money, Righting the Mother Tongue, and A Left-Hand Turn Around the World. David lives in Portland, Oregon, with his family.

The lively, informative book is full of evidence/cocktail party fodder proving that the English spelling system is a hopeless tangle of French, Dutch, Latin, German and much, much more and really makes no sense at all. — Portland Tribune

An intellectual travelogue across the centuries that also ranges geographically from the Litchfield haunts of Dr. Johnson, creator of the first great English dictionary, to the Silicon Valley home of Les Earnest, the progenitor of computerized spell-checking. — Wall Street Journal

“An engaging ramble through our orthographic thickets” — Boston Globe

A lively, engaging look at the idiosyncratic derivations and permutations of spelling in the English language. — Seattle Post Intelligencer

“Sprightly history that sensibly balances the merits of standardization against the forces for freedom.” — Kirkus Reviews

“A funny and fact-filled look at our astoundingly inconsistent written language, from Shakespeare to spell-check.” — St. Petersburg Times