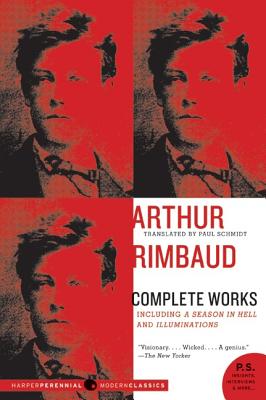 One of the world's most influential poets, Arthur Rimbaud (1854-1891) is remembered as much for his volatile personality and tumultuous life as he is for his writings, almost all of which he produced before the age of twenty. Paul Schmidt's acclaimed collection brings together his complete poetry, prose, and letters, including "The Drunken Boat," "The Orphans' New Year," "After the Flood," and "A Season in Hell." Complete Works is divided into eight "seasons"—Childhood, the Open Road, War, the Tormented Heart, the Visionary, the Damned Soul, a Few Belated Cowardices, and the Man with the Wind at His Heels—that reflect the facets of Rimbaud's life. Insightful commentary by Schmidt reveals the courage, vision, and imagination of Rimbaud's poetry and sheds light on one of the most enigmatic figures in letters.

“Paul Schmidt has wavered--no, has hovered--between solicitude and critique, and the result of such suspension is his beautiful, daring, careful work . . . serves us the Rimbaud that matters in its fine mesh.” — Richard Howard, Pulitzer Prize-winner poet and translator; professor, Columbia University

“This collection is interesting for the light it casts on the background to the writing of ‘A Season in Hell’ and the poems later referred to (by Paul Verlaine) as ‘The Illuminations’. As well as the poems themselves, Schmidt includes transcriptions of letters (to Verlaine and others) and biographical details from the life of this most nihilistic genius.” — The Guardian

“A mystic in the wild state.” — Paul Claudel