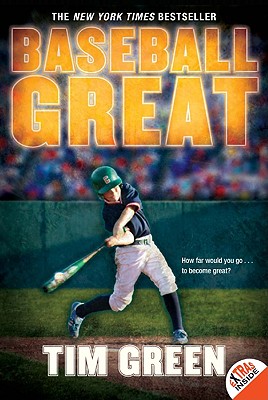 This is book number 1 in the Baseball Great series.

When the school paper calls him “Grant Middle’s best hope for its first-ever city-wide championship,” Josh feels like he’s starting to get noticed—in good and bad ways. Seeing Josh’s talent, his father drags him out of the school baseball tryouts and gets him in the running for the Titans, the local youth championship team coached by Rocky Valentine.

All Josh really wants to do is play ball, but now Rocky wants him to gulp down protein shakes and other supplements. Suspicious, Josh and his new friend, Jaden, uncover a dangerous secret—and catch the attention of one man who will do anything to keep them from exposing it.

Tim Green, for many years a star defensive end with the Atlanta Falcons, is a man of many talents. He's the author of such gripping books for adults as the New York Times bestselling The Dark Side of the Game and American Outrage. Tim graduated covaledictorian from Syracuse University and was a first-round draft pick. He later earned his law degree with honors, and he has also worked as an NFL commentator for FOX Sports and NPR.

His first book for young readers, Football Genius, inspired in part by his players and his own kids, became a New York Times bestseller and was followed by Football Hero, Football Champ, The Big Time, and Deep Zone. He drew on his experiences playing and coaching Little League for Rivals and Pinch Hit and two more New York Times bestsellers: Baseball Great and Best of the Best.

Bestselling author Jon Scieszka called Tim Green's Unstoppable, a book about a boy's struggle with cancer that debuted at #2 on the New York Times bestseller list, "Absolutely heroic. And something every guy should read."

Tim Green lives with his wife, Illyssa, and their five children in upstate New York.

“Green delivers a fast-paced story, told in short chapters that build to the exciting climax. Add this to other novels that feature the temptations of steroids for young athletes, including Carl Deuker’s Gym Candy (2007) and John Coy’s Crackback (2005).” — Booklist