Burn This Book: Notes on Literature and Engagement (Paperback) 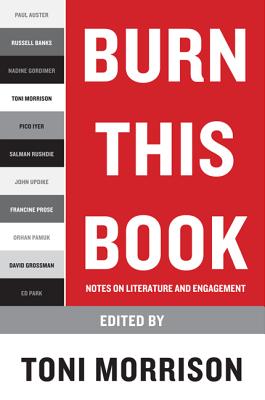 Burn This Book: Notes on Literature and Engagement (Paperback)

Published in conjunction with the PEN American Center, Burn This Book is a powerful collection of essays that explore the meaning of censorship and the power of literature to inform the way we see the world, and ourselves.

As Americans we often take our freedom of speech for granted. When we talk about censorship we talk about China, the former Soviet Union, or the Middle East. But recent political developments—including the passage of the Patriot Act—have shined a spotlight on profound acts of censorship in our own backyard. Burn This Book features a sterling roster of award-winning writers offering their incisive, uncensored views on this most essential topic, including such revered literary heavyweights as Toni Morrison, Salman Rushdie, Orhan Pamuk, David Grossman, and Nadine Gordimer, among others.

Both provocative and timely, Burn This Book is certain to inspire strong opinions and ignite spirited, serious dialogue.

Toni Morrison was awarded the Nobel Prize for Literature in 1993. She is the author of many novels, including Sula, Song of Solomon, Beloved, and, most recently, A Mercy. She has also received the National Book Critics Circle Award and a Pulitzer Prize for her fiction.

“It’s a slim volume, one that can be read in an afternoon, but don’t let this fool you into thinking it lacks power. Morrison’s—and the book’s—central thesis is true, if not necessarily original: ‘A writer’s life and work are not a gift to mankind; they are its necessity.’” — Los Angeles Times