All the Best Rubbish: The Classic Ode to Collecting (Paperback) 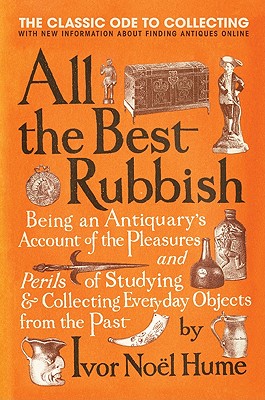 All the Best Rubbish: The Classic Ode to Collecting (Paperback)

“A delight. All the Best Rubbish is one of those rare volumes that both instruct and entertain. I recommend it to any collector.” —Harold L. Peterson, Chief Curator, US National Park Service

Ivor Noel Hume, the former chief archaeologist of Colonial Williamsburg, offers a delightful, anecdotal, and informative celebration of the joys of collecting.

In his newly revised edition, All the Best Rubbish traces the fascinating history of collecting from its recorded beginnings and describes the remarkable detective work that goes into establishing the probable facts about uncovered and often underappreciated treasures. Now expanded with hints, tips, and helpful information about antique-hunting online, All the Best Rubbish is the ideal book for the antiquarian or amateur.

Noël Hume has pursued bottles, pottery, clocks, and coins through junk shops, street markets, attics, and cellars on two continents. He's unearthed the most fascinating—and valuable—rubbish from the most unlikely places: the shores of the Thames in London; the lagoons of the Caribbean; the bottom of Martha Washington's well. Hume knows everything that's worth knowing about collecting—why we do it, what we can find, where we can find it, and what we can learn from it.

Ivor NoËl Hume is the former chief archaeologist of Colonial Williamsburg and director of the Williamsburg Depart-ment of Archaeology. He led the team that discovered the first traces of England's failed Roanoke Island colony, and his book A Guide to Artifacts of Colonial America is the definitive source on the subject. In 1992 Hume was awarded an OBE (Order of the British Empire) by Queen Elizabeth II in recognition of his services to British cultural interests in Virginia. He lives in Williamsburg, Virginia.