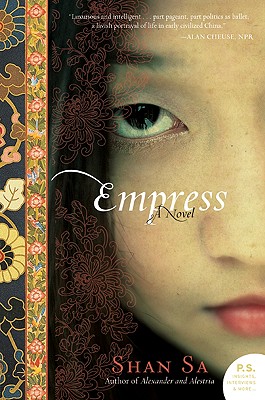 Now available with P.S., Empress is the hugely popular historical novel of one of China’s most controversial historical figures: its first female emperor, Empress Wu, who emerged in the Tang Dynasty and ushered in a golden age. Writing with epic assurance, poetry, and vivid historic detail, Shan Sa, author of Alexander and Alestria, plumbs the psychological and philosophical depths of what it means to be a striving mortal in a tumultuous, power-hungry world.

Shan Sa was born in Beijing and had her first poems, essays, and stories published at the age of eight. In 2001 her novel The Girl Who Played Go won the Goncourt Prize. The author of Empress, she is also a celebrated artist who has had prominent exhibitions in Paris and New York.

“A compelling read and surprisingly easy to follow, given its exotic complexity.” — Kirkus Reviews

“Brilliant . . . illuminates the life and times of one of the ancient world’s most powerful, capable, and overlooked women.” — Booklist