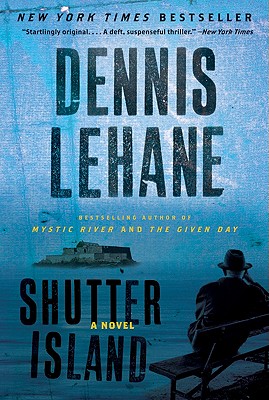 The basis for the blockbuster motion picture directed by Martin Scorsese and starring Leonardo DiCaprio, Shutter Island by New York Times bestselling author Dennis Lehane is a gripping and atmospheric psychological thriller where nothing is quite what it seems. The New York Times calls Shutter Island, “Startlingly original.” The Washington Post raves, “Brilliantly conceived and executed.” A masterwork of suspense and surprise from the author of Mystic River and Gone, Baby, Gone, Shutter Island carries the reader into a nightmare world of madness, mind control, and CIA Cold War paranoia and is unlike anything you’ve ever read before.

Dennis Lehane is the author of thirteen novels—including the New York Times bestsellers Live by Night; Moonlight Mile; Gone, Baby, Gone; Mystic River; Shutter Island; and The Given Day—as well as Coronado, a collection of short stories and a play. He grew up in Boston, MA and now lives in California with his family.

“A lollapalooza of a corkscrew thriller…sure to be the most talked–about thriller of the year.”
— Kirkus Reviews, starred review

“The ride this novel provides is as good as entertainment gets.”
— Miami Herald

“Combines the claustrophobia of . . . Agatha Christie . . . with the creepiness of a good Stephen King yarn. . . . Good luck putting this one down.
— San Francisco Chronicle Book Review

“Startlingly original…instantly cinematic… unfolds with increasing urgency until it delivers a visceral shock in its final moments.”
— New York Times

“Nightmarish…it’s not a book to start before bedtime. Even if you finish before dawn, Shutter Island will trouble your sleep.”
— Orlando Sentinel

“Fasten your seat belts for a bumpy, breakneck ride…utterly absorbing… is an express train with no local stops…engrossing.”
— Boston Globe

“There is no mystery…about how good this book is; like Mystic River, it’s a tour de force.”
— Publishers Weekly (starred review)