Primetime Propaganda: The True Hollywood Story of How the Left Took Over Your TV (Paperback) 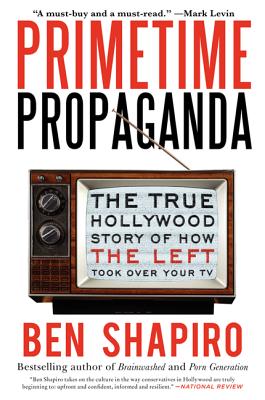 Primetime Propaganda: The True Hollywood Story of How the Left Took Over Your TV (Paperback)

Movie critic Michael Medved calls Ben Shapiro, “One of our most refreshing and insightful voices on the popular culture, as well as a conscience for his much-maligned generation.” With Primetime Propaganda, the syndicated columnist and bestselling author of Brainwashed, Porn Generation, and Project President tells the shocking true story of how the most powerful medium of mass communication in human history became a vehicle for spreading the radical agenda of the left side of the political spectrum. Similar to what Bernard Goldberg’s Bias and A Slobbering Love Affair did for the liberal news machine, Shapiro’s Primetime Propaganda is an essential exposé of corrupting media bias, pulling back the curtain on widespread and unrepentant abuses of the Hollywood entertainment industry.

Ben Shapiro is founding editor-in-chief and editor emeritus of The Daily Wire and host of "The Ben Shapiro Show," the top conservative podcast in the nation. A New York Times bestselling author, Shapiro is a graduate of Harvard Law School, and an Orthodox Jew. His work has been profiled in nearly every major American publication, and he has appeared as the featured speaker at many conservative events on campuses nationwide, several of those appearances targeted by progressive and “Antifa” activists.