The Seventeen Solutions: Bold Ideas for Our American Future (Paperback) 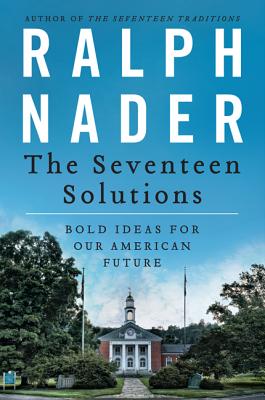 The Seventeen Solutions: Bold Ideas for Our American Future (Paperback)


Not On Our Shelves—Ships in 1-5 Days
Consumer advocate, activist, humanitarian, and former presidential candidate Ralph Nader is arguably the most provocative and important progressive voice in America today—a fearless reformer whom The Atlantic named one of the 100 most influential figures in American history. In these troubling times of intractable fiscal and social distress, Nader offers a new program to help rescue America: The Seventeen Solutions. His powerful, paradigm-shifting proposals address some of the most pressing concerns in our country today—from corporate crime to tax reform to health care and housing—and they should find a receptive audience not only among liberals, progressives, disillusioned Democrats, Rachel Maddow fans, and Occupy Wall Street supporters, but all concerned Americans.

Ralph Nader was recently named by the Atlantic as one of the 100 most influential figures in American history, one of only four living people to be so honored. The son of immigrants from Lebanon, he has launched two major presidential campaigns and founded or organized more than one hundred civic organizations. His groups have made an impact on tax reform, atomic power regulation, the tobacco industry, clean air and water, food safety, access to health care, civil rights, congressional ethics, and much more.

It will be very good for the country if Nader’s revelations shock a new generation. This book is a subversive primer that should be read in every high school civics class. — William Greider, The Nation