Astoria: Astor and Jefferson's Lost Pacific Empire: A Tale of Ambition and Survival on the Early American Frontier (Paperback) 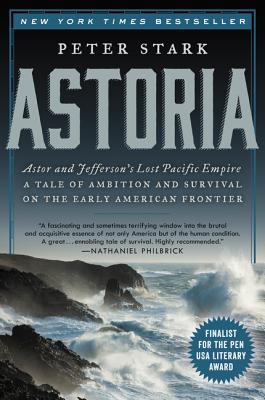 Astoria: Astor and Jefferson's Lost Pacific Empire: A Tale of Ambition and Survival on the Early American Frontier (Paperback)

In the tradition of The Lost City of Z and Skeletons in the Zahara, Astoria is the thrilling, true-adventure tale of the 1810 Astor Expedition, an epic, now forgotten, three-year journey to forge an American empire on the Pacific Coast. Peter Stark offers a harrowing saga in which a band of explorers battled nature, starvation, and madness to establish the first American settlement in the Pacific Northwest and opened up what would become the Oregon trail, permanently altering the nation's landscape and its global standing.

Six years after Lewis and Clark's began their journey to the Pacific Northwest, two of the Eastern establishment's leading figures, John Jacob Astor and Thomas Jefferson, turned their sights to founding a colony akin to Jamestown on the West Coast and transforming the nation into a Pacific trading power. Author and correspondent for Outside magazine Peter Stark recreates this pivotal moment in American history for the first time for modern readers, drawing on original source material to tell the amazing true story of the Astor Expedition.

Unfolding over the course of three years, from 1810 to 1813, Astoria is a tale of high adventure and incredible hardship in the wilderness and at sea. Of the more than one hundred-forty members of the two advance parties that reached the West Coast—one crossing the Rockies, the other rounding Cape Horn—nearly half perished by violence. Others went mad. Within one year, the expedition successfully established Fort Astoria, a trading post on the Columbia River. Though the colony would be short-lived, it opened provincial American eyes to the potential of the Western coast and its founders helped blaze the Oregon Trail.

Peter Stark is a historian and adventure writer. He is the author of the New York Times bestseller Astoria, along with The Last Empty Spaces, Last Breath, and At the Mercy of the River. He is a correspondent for Outside magazine, has written for Smithsonian and The New Yorker, and is a National Magazine Award nominee. He lives in Montana with his wife and children.

“Stark’s delightful narrative is proof that even though Astor didn’t leave the legacy he intended, his grand failure certainly deserves its own place in history.” — New York Times Book Review

“In his new book, Astoria ... Stark moves skillfully back and forth from one segment of the splintered expedition to another. He also raises a tantalizing question about the enterprise as a whole.” — Washington Post

“[Descriptive] passages . . . make Stark’s fine book truly distinctive. They raise Astoria above the level of a well-done historical adventure and help the reader get into a scene and understand the context or see relationships between participants and between then and now.” — Chicago Tribune

“Peter Stark’s Astoria is a vivid recreation of an era when the Pacific Northwest was a vast unexploited wilderness, with Astoria as its main American colony. . . . Stark is particularly strong in describing the wilderness and its effects on human psychology.” — Seattle Times

“Stark tells their grim story well . . . ‘Astoria’ is a well-written . . . account of John Jacob Astor’s attempt to found a commercial empire in the Pacific Northwest. It illuminates the cultural limits of the American approach to frontier expansion.” — Portland Oregonian

“In this harrowing historical tale of adventure and hardship, journalist Peter Stark re-creates a largely forgotten 19th-century expedition-during which one group crossed the Rockies and another sailed around Cape Horn-to establish America’s first colony on the Pacific Northwest coast.” — Parade Magazine

“A fast-paced, riveting account of exploration and settlement, suffering and survival, treachery and death. [Stark] recovers a remarkable piece of history: the story of America’s first colony on the continent’s West coast.” — Kirkus (Starred Review)

“The story of its founders is harshly inspiring, a deeply researched look into the irresistible drive to explore the unknown and the capacity of people to survive, not only the elements, but one another.” — Minneapolis Star Tribune

“... a thrilling true-adventure tale ... A breathtaking account of an expedition that changed the geography of a young nation and its place in global commerce and politics.” — Booklist

“Author Peter Stark retraces the journey in spellbinding detail, making use of journals to get inside the minds of these explorers who set out just two years after Lewis and Clark successfully crossed the continent. . . . Astoria brings to life a harrowing era of American exploration.” — Bookpage

“Stark’s compelling, contextual account of Astoria’s founding—at one time documented by none other than author Washington Irving - casts this early venture as a pivotal point in the development of the Pacific Northwest and the nation.” — Crosscut (Seattle)

“For better or worse, the precedents set by Astor and his expeditions created a tangible American legacy of entrepreneurship, risk-taking, and manifest destiny. Carefully researched and splendidly written—an utterly spellbinding account.” — Bellingham Herald

“A great yarn set in our own corner of the continent.” — Inlander

“Astoria is ultimately worth reading not just because it’s about Oregon history, but because it contextualizes Oregon’s past within American history. . . . The book is a welcome departure from romanticized tales of Lewis and Clark or of later pioneers.” — Portland Mercury

“Well researched and historically accurate, [Astoria] reads much like an adventure novel, engaging you from start to finish.” — Coast Weekend

“Peter Stark does readers a very large service in reminding us about this extraordinary and important piece of North American history. I can’t recommend Astoria highly enough for anyone interested in the colonization of the American West.” — BookBrowse.com

“A truly great adventure story, filled with high drama and hardship that would put ‘Survivor’ cast members into a tailspin of humility.” — BookReporter.com

“Peter Stark’s Astoria picks up where the Lewis and Clark Expedition leaves off, providing a fascinating and sometimes terrifying window into the brutal and acquisitive essence of not only America but of the human condition. It’s also a great and ... an ennobling tale of survival. Highly recommended.” — Nathaniel Philbrick, author of Bunker Hill, and In the Heart of the Sea

“Peter Stark weaves a spellbinding tale from this lost chapter of American history. Astoria gave me the sense all readers long for: that nothing exists but the riveting narrative unfolding in your head.” — Albany Times Union

“A splendid account of the man and men who had the audacity, passion, and courage to dream of an American Empire. Peter Stark’s Astoria is a must read for anyone wanting to understand the power of leadership in its purest form.” — Stephenie Ambrose-Tubbs, author of The Lewis and Clark Companion

“Peter Stark leaps aboard at the very beginning of John Jacob Astor’s Pacific Northwest enterprise, then clings tenaciously to witness every twist, by land and by sea, along the entire desperate ride.” — Jack Nisbet, author of Sources of the River and The Collector

“This saga of ambition and adventure and courage is vividly told and thoroughly researched, a not very well known story of ambition confounded. Shipwrecks, bloodiness, and starve-to-death treks through drifted snow in the Rockies-Astoria is a hard-edged beauty.” — William Kittredge, author of A Hole in the Sky

Astoria is a scintillating corrective to the “guts and glory” school of American history and economics. [...] Grandiose visions ... have consequences, and Peter Stark’s depiction of the body count that results from this one unfolds with the inevitability of a fine tragedy and comedic zing of a good action flick. — David James Duncan, author of The Brothers K and The River Why