God and the Afterlife: The Groundbreaking New Evidence for God and Near-Death Experience (Large Print / Paperback) 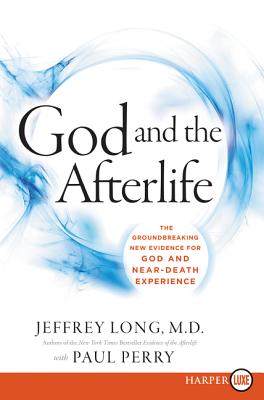 God and the Afterlife: The Groundbreaking New Evidence for God and Near-Death Experience (Large Print / Paperback)

Based on the largest near-death experience study in history, involving 3,000 people from diverse backgrounds and religious traditions, including nonbelievers, God and the Afterlife presents startling evidence that a Supreme Being exists—and there is amazing consistency about what he is like.

In his bestselling book Evidence of the Afterlife, Dr. Jeffrey Long showed us that there is a strong scientific case for life after death. Now, he goes further, revealing evidence that God is real. At the Near Death Experience Research Foundation, Dr. Long studied the stories of thousands of people who have journeyed to the afterlife. Though there are a wide variety of differences in how people experience NDEs—some see a bright light, others go through a tunnel, still others experience a review of their life—he discovered that many of the accounts shared a remarkably similar description of God; a Supreme Being who radiated love and grace.

Expanding on his analysis begun in Evidence of the Afterlife, God and the Afterlife is the first intensive exploration of the people who have reported going to the frontier of heaven, met God, and have returned to share their journey. Groundbreaking and profound, it provides new insight into the human experience and expands our notions of mortality, offering possibility, hope, and comfort.

Jeffrey Long, M.D., is a radiation oncologist in Houma, Louisiana, and has appeared on NBC's Today Show, ABC's World News Tonight with Peter Jennings, FOX's The O'Reilly Factor, and The Learning Channel. Long has also served on the board of directors of the International Association for Near-Death Studies and established the nonprofit Near Death Experience Research Foundation and the NDERF website.