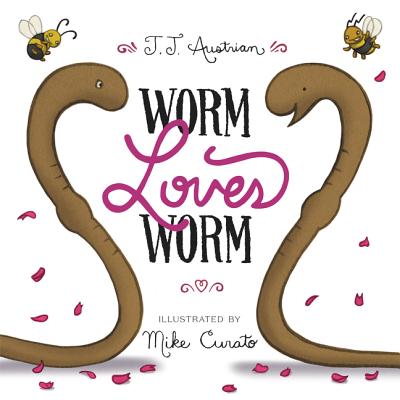 One of Time Out's “LGBTQ+ books for kids to read during Pride Month,” this irresistible picture book is a celebration of love in all its splendid forms from debut author J. J. Austrian and the acclaimed author-illustrator of Little Elliot, Big City, Mike Curato.

You are cordially invited to celebrate the wedding of a worm...and a worm.

The answer is: It doesn't matter. Because worm loves worm.

Perfect for fans of Last Week Tonight with John Oliver Presents A Day in the Life of Marlon Bundo, And Tango Makes Three, and The Sissy Duckling.

Mike Curato is also the creator of the popular Little Elliot series. He and his husband, Dan, were married in a very wormy wedding. They live in New York City.

“Austrian and Curato turn the simple wedding of two worms into a three-ring circus that slyly turns the whole controversy over same-sex versus heterosexual marriage on its head…As in life, love conquers all.” — Kirkus Reviews (starred review)

“How do you explain a revolution to a young audience? This book is a terrific start.” — Publishers Weekly (starred review)

“With its cute critters, sweet story, and messages of equality, this is a first purchase that celebrates the fact that love always wins.” — School Library Journal

“A witty and playful story...Adults looking for some assistance in explaining marriage equality will find this a concise and useful too.” — Bulletin of the Center for Children’s Books