CRUSH: Writers Reflect on Love, Longing, and the Lasting Power of Their First Celebrity Crush (Paperback) 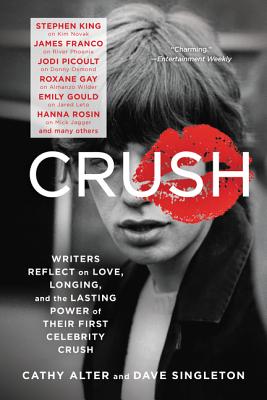 CRUSH: Writers Reflect on Love, Longing, and the Lasting Power of Their First Celebrity Crush (Paperback)

A star-studded collection of essays from acclaimed and bestselling authors and celebrities that illuminates the lasting power of desire and longing, and celebrates our initiation into the euphoria, pain, and mystery that is our first celebrity crush.

You never forget your first crush . . .

A few contributors channeled their devotion into obsessively writing embarrassing fan letters. Some taped pics in school lockers. Others decorated their bedroom walls with posters. For tweenaged Karin Tanabe, it was discovering bad boy Andy Garcia—playing the gun-loving mobster Vincent Corleone in The Godfather III. Barbara Graham unsuccessfully staked out an apartment on Park Avenue for a glimpse of her blue-eyed soulmate, Paul Newman. There was only one puppy for six-year-old Jodi Picoult—Donny Osmond—while Jamie Brisick’s pre-teen addiction was Speed Racer.

Swoon-worthy and unforgettable, the essays in CRUSH will leave you laughing, make you cry, and keep you enthralled—just like your first celebrity crush.

Cathy Alter’s feature articles, essays, and reviews have appeared in local and national newspapers and magazines including The Washington Post, Washingtonian, The Atlantic, The Huffington Post, Self, McSweeney’s, and SMITH Magazine. Her book, Virgin Territory: Stories from the Road to Womanhood was released in 2004 and her memoir, Up for Renewal: What Magazines Taught Me About Love, Sex, and Starting Over was released in July 2008. She holds an M.A. from Johns Hopkins University, where she is currently a faculty member and nonfiction advisor.

Dave Singleton’s work has appeared in The Washington Post, Chicago Tribune, PBS’s Next Avenue, AARP Media, Yahoo, MSN, the BBC, Washingtonian, Harper’s Bazaar, and OUT.   His two previous books are The Mandates and Behind Every Great Woman.  His honors include the Media Industry Award for Outstanding Exclusive Coverage, GLAAD Award for Outstanding Multimedia Journalism, and two NLGJA Excellence in Online Journalism awards. He’s a Caring.com columnist and teaches at The Writer’s Center in Washington, D.C.  Visit his website www.davesingleton.com and follow him on Twitter @DCDaveSingleton.

“This solid, legitimate anthology that reflects on a compelling and universal phenomenon will put readers back in touch with their younger selves.” — Library Journal

“There’s a lot to enjoy in these...pieces.” — Washington Post

“Entertaining...Some stories are funny...others are inspiring...Reading these short, angst-packed essays about starting at movie screens and listening to transistor radios is like reminiscing with old friends...[A] reminder that first loves are always worth recalling.” — Booklist

“Charming...The authors do a remarkable job collecting different types of crushes while keeping the reminiscences short and sweet...A book that balances heartbreak and relief, blind love and terror. ” — Publishers Weekly