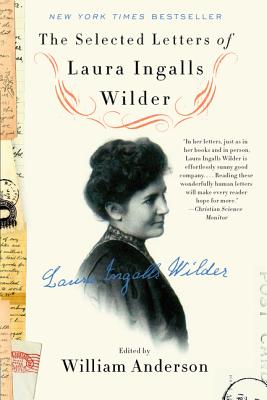 Available for the first time and collected in one volume, the letters of one of America’s most beloved authors, Laura Ingalls Wilder—a treasure trove that offers new and unexpected understanding of her life and work.

The Selected Letters of Laura Ingalls Wilder is a vibrant, deeply personal portrait of this revered American author, illuminating her thoughts, travels, philosophies, writing career, and dealings with family, friends, and fans as never before.

This is a fresh look at the adult life of the author in her own words. Gathered from museums and archives and personal collections, the letters span over sixty years of Wilder’s life, from 1894–1956 and shed new light on Wilder’s day-to-day life. Here we see her as a businesswoman and author—including her beloved Little House books, her legendary editor, Ursula Nordstrom, and her readers—as a wife, and as a friend. In her letters, Wilder shares her philosophies, political opinions, and reminiscences of life as a frontier child. Also included are letters to her daughter, writer Rose Wilder Lane, who filled a silent role as editor and collaborator while the famous Little House books were being written.

Wilder biographer William Anderson collected and researched references throughout these letters and the result is an invaluable historical collection, tracing Wilder’s life through the final days of covered wagon travel, her life as a farm woman, a country journalist, Depression-era author, and years of fame as the writer of the Little House books. This collection is a sequel to her beloved books, and a snapshot into twentieth-century living.

William Anderson is a historian, educator, and author of twenty-five books of biography, travel, and history. His groundbreaking research on Laura Ingalls Wilder and her books led to many HarperCollins titles, including Laura Ingalls Wilder: A Biography, Laura Ingalls Wilder Country, and A Little House Sampler. He has also written for Travel & Leisure, the Saturday Evening Post, the Christian Science Monitor, and many other national magazines. Anderson is a frequent speaker at conferences, schools, and libraries. He makes his home in Michigan.

Laura Ingalls Wilder (1867–1957) was born in a log cabin in the Wisconsin woods. With her family, she pioneered throughout America’s heartland during the 1870s and 1880s, finally settling in Dakota Territory. She married Almanzo Wilder in 1885; their only daughter, Rose, was born the following year. The Wilders moved to Rocky Ridge Farm at Mansfield, Missouri, in 1894, where they established a permanent home. After years of farming, Laura wrote the first of her beloved Little House books in 1932. The nine Little House books are international classics. Her writings live on into the twenty-first century as America’s quintessential pioneer story.

“A must for a new generation of readers of Wilder’s stories and for those who recall having enjoyed the “Little House” books as a child and wish to gain further insight into the life of the series’ author.” — Library Journal

“Wilder fans will surely rejoice at this collection, which may also serve to introduce a new generation of readers to this important and much-loved American author.” — Booklist

“[I]n her letters, just as in her books and in person, Laura Ingalls Wilder is effortlessly sunny good company...[R]eading these wonderfully human letters will make every reader hope for more.” — Christian Science Monitor