Rebel in the Ranks: Martin Luther, the Reformation, and the Conflicts That Continue to Shape Our World (Paperback) 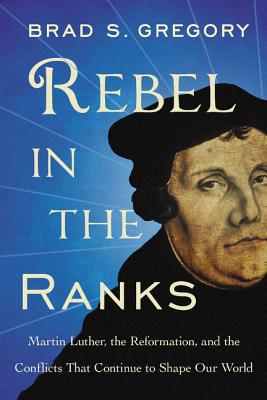 Rebel in the Ranks: Martin Luther, the Reformation, and the Conflicts That Continue to Shape Our World (Paperback)

When Martin Luther published his 95 Theses in October 1517, he had no intention of starting a revolution. But very quickly his criticism of indulgences became a rejection of the papacy and the Catholic Church emphasizing the Bible as the sole authority for Christian faith, radicalizing a continent, fracturing the Holy Roman Empire, and dividing Western civilization in ways Luther—a deeply devout professor and spiritually-anxious Augustinian friar—could have never foreseen, nor would he have ever endorsed. From Germany to England, Luther’s ideas inspired spontaneous but sustained uprisings and insurrections against civic and religious leaders alike, pitted Catholics against Protestants, and because the Reformation movement extended far beyond the man who inspired it, Protestants against Protestants. The ensuing disruptions prompted responses that gave shape to the modern world, and the unintended and unanticipated consequences of the Reformation continue to influence the very communities, religions, and beliefs that surround us today.

How Luther inadvertently fractured the Catholic Church and reconfigured Western civilization is at the heart of renowned historian Brad Gregory’s Rebel in the Ranks. While recasting the portrait of Luther as a deliberate revolutionary, Gregory describes the cultural, political, and intellectual trends that informed him and helped give rise to the Reformation, which led to conflicting interpretations of the Bible, as well as the rise of competing churches, political conflicts, and social upheavals across Europe. Over the next five hundred years, as Gregory’s account shows, these conflicts eventually contributed to further epochal changes—from the Enlightenment and self-determination to moral relativism, modern capitalism, and consumerism, and in a cruel twist to Luther’s legacy, the freedom of every man and woman to practice no religion at all.

With the scholarship of a world-class historian and the keen eye of a biographer, Gregory offers readers an in-depth portrait of Martin Luther, a reluctant rebel in the ranks, and a detailed examination of the Reformation to explain how the events that transpired five centuries ago still resonate—and influence us—today.

BRAD GREGORY is a professor of European History at Notre Dame and the author of Salvation at Stake: Christian Martyrdom in Early Modern Europe, which received six awards, including the prestigious Phi Alpha Theta Best First Book Award and the American Catholic Historical Association’s John Gilmary Shea Prize. His second book, The Unintended Reformation: How a Religious Revolution Secularized Society, was named Book of the Year by The Spectator, the Times Literary Supplement, and ABC Religion & Ethics. He also received the first annual Hiett Prize in the Humanities from the Dallas Institute of Humanities and Culture. He lives in South Bend, Indiana.

“This is just the book for understanding the momentous changes initiated by the Protestant Reformation five hundred years ago. Brad Gregory expertly describes both the significance of Martin Luther (as the first protestant) and the tremendous impact of the Reformation era on everything that has followed.” — Mark Noll, McAnaney Professor of History Emeritus at the University of Notre Dame and author of Protestantism: A Very Short Introduction

“Vividly written and respectful of all parties...Rebel in the Ranks is the story of the why, the who and the how [the Reformation] happened – and the consequences. It’s also a witness to the cost of weaponizing truth, and pursuing it unmoored from patience, self-criticism and love.” — The Most Rev Charles J Chaput, OFM Cap, Archbishop of Philadelphia