The Good Lie: A Novel (Paperback) 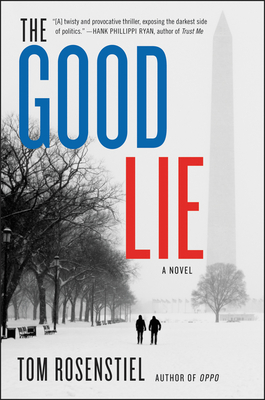 The Good Lie: A Novel (Paperback)

When a shadowy American diplomatic complex is attacked in North Africa, the White House is besieged by accusations of incompetence and wild conspiracy theories. Eager to learn the truth, the president and his staff turn to Peter Rena and his partner, Randi Brooks. The investigators dive headfirst into the furtive world of foreign intelligence and national security, hoping to do it quietly. That becomes impossible, though, when it blows up into an all-out public scandal: Congress opens hearings and a tireless national security reporter publishes a bombshell exposé.

Now, Rena and Brooks are caught in the middle. The White House wants to prevent debilitating fallout for the president, the military appears to be in shutdown mode, the press is hungry for another big story, and rival politicians are plotting their next move. Rena learns the hard way that secrets in Washington come with a very high price.

With intelligence, style, and a breakneck pace, The Good Lie explores the contours of secrets, lies, and the dangers of a never-ending war.

“One of the smartest thrillers in recent memory.” —Dallas Morning News

“A debut that will be remembered for years.” —Michael Connelly

Tom Rosenstiel is the author of eleven books, four of which are novels. His nonfiction is focused on politics and media, and he is recognized as one of the leading thinkers in the country in the future of media. His book The Elements of Journalism, now in its fourth edition, has been translated into more than 25 languages. Tom is the Eleanor Merrill Visiting Professor on the future of Journalism at the University of Maryland’s Philip Merrill College of Journalism and a senior fellow at the Brookings Institution. He formerly was the executive director of the American Press Institute and the founder and director of the media research unit at Pew Research Center, which he directed for 16 years. He was the press critic of the Los Angeles Times for a decade and is a non-resident senior fellow at the Brookings Institution in Washington. He lives in Chevy Chase Maryland with his wife, Rima.

“Gripping, sinister, and so chillingly possible that only a true Washington insider could have written it. The talented Rosenstiel brings his reporter’s clarity and insight to this twisty and provocative thriller exposing the darkest side of politics.” — Hank Phillippi Ryan, author of Trust Me

“Smart, assured and perfectly attuned to today’s toxic politics, The Good Lie hurtles along with the insider excitement of a tell-all Washington blockbuster.” — Dan Fesperman, author of Safe Houses