Kissinger the Negotiator: Lessons from Dealmaking at the Highest Level (Paperback) 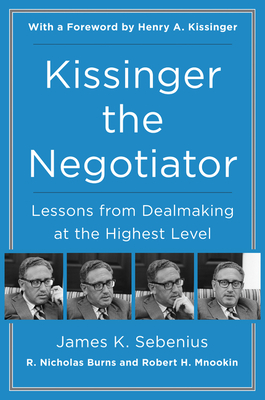 Kissinger the Negotiator: Lessons from Dealmaking at the Highest Level (Paperback)

In this groundbreaking, definitive guide to the art of negotiation, three Harvard professors—all experienced negotiators—offer a comprehensive examination of one of the most successful dealmakers of all time.

Politicians, world leaders, and business executives around the world—including every President from John F. Kennedy to Donald J. Trump—have sought the counsel of Henry Kissinger, a brilliant diplomat and historian whose unprecedented achievements as a negotiator have been universally acknowledged. Now, for the first time, Kissinger the Negotiator provides a clear analysis of Kissinger’s overall approach to making deals and resolving conflicts—expertise that holds powerful and enduring lessons.

James K. Sebenius (Harvard Business School), R. Nicholas Burns (Harvard Kennedy School of Government), and Robert H. Mnookin (Harvard Law School) crystallize the key elements of Kissinger’s approach, based on in-depth interviews with the former secretary of state himself about some of his most difficult negotiations, an extensive study of his record, and many independent sources. Taut and instructive, Kissinger the Negotiator mines the long and fruitful career of this elder statesman and shows how his strategies apply not only to contemporary diplomatic challenges but also to other realms of negotiation, including business, public policy, and law.

Essential reading for current and future leaders, Kissinger the Negotiator is an invaluable guide to reaching agreements in challenging situations.

James K. Sebenius specializes in analyzing and advising corporations and governments worldwide on their most challenging negotiations. After years in the private sector (Blackstone) and the U.S. government (Commerce and State Departments), he is now the Gordon Donaldson Professor of Business Administration at Harvard Business School, where he founded the Negotiation unit and teaches advanced negotiation to students and senior executives. He directs the Harvard Negotiation Project at Harvard Law School and is a partner in Lax Sebenius LLC, a negotiations strategy firm.

R. Nicholas Burns is the Roy and Barbara Goodman Family Professor of the Practice of Diplomacy and International Relations at the Harvard Kennedy School of Government. A career officer in the U.S. Foreign Service, he served as under secretary of state for political affairs and as ambassador to NATO and to Greece.

Robert H. Mnookin is the Samuel Williston Professor of Law at Harvard Law School, the chair of the Program on Negotiation at Harvard Law School, and the director of the Harvard Negotiation Research Project. As a mediator, facilitator, and consultant, he has applied his interdisciplinary approach to a wide range of commercial and political conflicts.

Henry A. Kissinger is an American diplomat and historian. He served as national security advisor and later, concurrently, as U.S. secretary of state in the administrations of Presidents Richard Nixon and Gerald Ford. For his actions negotiating the end of U.S. involvement in Vietnam, Kissinger received the 1973 Nobel Peace Prize. Since retiring from government service, his advice has been sought by top business executives and world leaders, including subsequent U.S. presidents.

“Henry Kissinger’s acute understanding of all aspects of international negotiations, from his close attention to detail to his uncanny ability to craft effective negotiating strategies, has made him one of the most highly regarded diplomats in American history. Kissinger the Negotiator is a straightforward examination of Kissinger’s finely honed skills in statecraft that offers keen insight for anyone interested or involved in negotiations at any level.” — James A. Baker III, sixty-first U.S. secretary of state

“Kissinger was a masterly negotiator with a sense of both tactics and strategy. This book, based on deep interviews and research, shows his strengths and weaknesses as well as, most importantly, the lessons to be learned from his most complex endeavors.” — Walter Isaacson, #1 New York Times bestselling author of Leonardo Da Vinci

“Henry Kissinger’s negotiating record is legendary. In this engaging book, the authors were able to get to the root of his tactics and successes, and share practical insights for readers. I would highly recommend Kissinger the Negotiator for anyone facing challenging negotiations in business or diplomacy.” — John Chambers, former chairman, CEO, and president, Cisco Systems, Inc.

“A very readable and informative book that will serve future negotiators well. It also presents a new look at the importance of Henry Kissinger’s role in forming the world in which we now live.” — Booklist