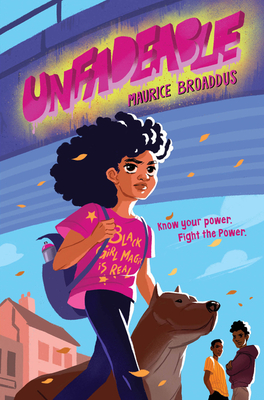 Perfect for fans of Jason Reynolds and Kelly Yang, readers will love this heartfelt and genuine story about building community, finding family, and the power of Black girl magic.

Bella “Unfadeable” Fades is determined to stay out of trouble. A wiser-than-her-years graffiti artist known for tagging walls and bridges in her Indianapolis neighborhood, the Land, Bella plans to spend her summer break laying low and steering clear of anyone who might tip off to social services that she’s living on her own.

But keeping a low profile is all but impossible when Bella discovers people in high places are trying to defund the Land. She has to find a way to fight back.

Getting involved will mean putting herself out there—making connections with unlikely friends and attracting potential enemies. But if Bella doesn’t put her trust in her neighbors and learn how to bring her community together, her home—and her future—will never be the same.

Maurice Broaddus, a community organizer and teacher, has written and edited short stories for a number of magazines as well as authoring several novels and novellas for adults. Learn more about him at www.mauricebroaddus.com.

"Readers will immediately root for [Bella] throughout this well-paced story that addresses the impact of gentrification and the power of young voices. The clear narration sends readers a strong message about civic responsibility and how they’re never too young to get involved in decision-making that affects their communities." — Kirkus Reviews (starred review)

"A timely story of place and displacement. Coupled with a vivid depiction of Indianapolis’ overlooked splendor, this heart-wrenching story of friendship, family, and belonging is a perfect read for the middle-grader looking for action and attitude with a considerable dose of do-good." — Booklist (starred review)

"Broaddus is not a preacher. He tells good stories and lets readers figure out the lessons." — Russ Pulliam, The IndyStar

Praise for THE USUAL SUSPECTS: “Readers will love watching these two uniquely gifted black boys explore the complicated tensions between impulses and choices, independence and support, turnin’ up and getting through.” — Kirkus Reviews (starred review)

“A rare and much-needed glimpse into the world of exceptional learners.” — School Library Journal

“[Broaddus] sheds revealing light on the nature of systemic profiling, based on class, race, and neurodiversity, at schools and within society.” — Publishers Weekly

"Through its discerning, young Black protagonist, [The Usual Suspects] tackles difficult subjects with nuance, humor, and heart, always bringing it back to the characters. A great choice for upper middle-graders in search of a fun and meaningful read." — ALA Booklist

"I want this book, so full of wit and intelligence, raw honesty and clever plotting, to be so well known that when I say “The Usual Suspects” to a room of librarians, their first thoughts involve neither Casablanca or Keyser Soze but this work by Maurice Broaddus." — School Library Journal Review of the Day