Night of the Assassins: The Untold Story of Hitler's Plot to Kill FDR, Churchill, and Stalin (Paperback) 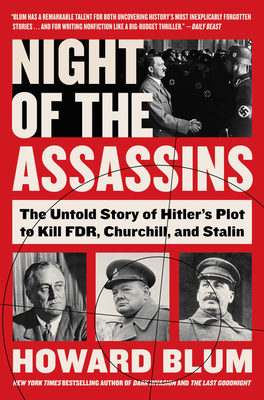 Night of the Assassins: The Untold Story of Hitler's Plot to Kill FDR, Churchill, and Stalin (Paperback)

The New York Times bestselling author returns with a tale as riveting and suspenseful as any thriller: the true story of the Nazi plot to kill the leaders of the United States, Great Britain, and the U.S.S.R. during World War II.

The mission: to kill the three most important and heavily guarded men in the world.
The assassins: a specially trained team headed by the killer known as The Most Dangerous Man in Europe.
The stakes: nothing less than the future of the Western world.

The year is 1943 and the three Allied leaders—Franklin D. Roosevelt, Winston Churchill, and Joseph Stalin—are meeting for the first time at a top-secret conference in Tehran. But the Nazis have learned about the meeting and Hitler sees it as his last chance to turn the tide. Although the war is undoubtedly lost, the Germans believe that perhaps a new set of Allied leaders might be willing to make a more reasonable peace in its aftermath. And so a plan is devised—code name Operation Long Jump—to assassinate FDR, Churchill, and Stalin.

Immediately, a highly trained, hand-picked team of Nazi commandos is assembled, trained, armed with special weapons, and parachuted into Iran. They have six days to complete the daring assignment before the statesmen will return home. With no margin for error and little time to spare, Mike Reilly, the head of FDR’s Secret Service detail—a man from a Montana silver mining town who describes himself as “an Irish cop with more muscle than brains”—must overcome his suspicions and instincts to work with a Soviet agent from the NKVD (the precursor to the KGB) to save the three most powerful men in the world.

Filled with eight pages of black-and-white photographs, Night of the Assassins is a suspenseful true-life tale about an impossible mission, a ticking clock, and one man who stepped up to the challenge and prevented a world catastrophe.

Howard Blum is the author of the New York Times bestseller and Edgar Award winner American Lightning, as well as Wanted!, The Gold of Exodus, Gangland, The Floor of Heaven, and, most recently, a 2018 New York Times Notable Book: In the Enemy's House. Blum is a contributing editor at Vanity Fair. While at the New York Times, he was twice nominated for a Pulitzer Prize for investigative reporting. He is the father of three children, and lives in Connecticut.

“[Blum] weaves a fast-paced story of how Nazi intelligence services and special commando units tried to infiltrate an assassination team into Iran…Ian Fleming himself could not have written such an improbable yet actual plot. The moves and counter-moves in this tight and engaging story show that World War II was fought just as much in shadowy back alleys as on the battlefield.” — New York Journal of Books

“Here is a story largely unknown about a plot by Adolf Hitler to murder Franklin Roosevelt, Winston Churchill and Josef Stalin…Paced like a novel, Mr. Blum will leave you waiting for the big Nazi reveal.” — Pittsburgh Post-Gazette

"An entertaining story of skullduggery....a breathless drama in novelistic form with insight into the characters' conversations, thoughts, and emotions." — Kirkus Reviews