Sontag: Her Life and Work (Hardcover) 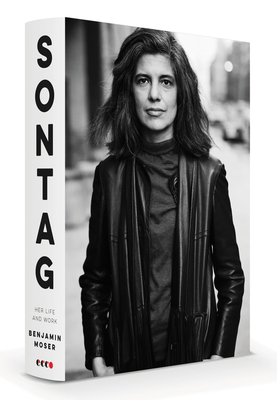 Sontag: Her Life and Work (Hardcover)

WINNER OF THE PULITZER PRIZE

Finalist for the Lambda Literary Award

Finalist for the PEN/Jacqueline Bograd Weld Award for Biography

Named one of the Best Books of the Year by: O Magazine, Milwaukee Journal Sentinel, Seattle Times

The definitive portrait of one of the American Century’s most towering intellectuals: her writing and her radical thought, her public activism and her hidden private face

No writer is as emblematic of the American twentieth century as Susan Sontag. Mythologized and misunderstood, lauded and loathed, a girl from the suburbs who became a proud symbol of cosmopolitanism, Sontag left a legacy of writing on art and politics, feminism and homosexuality, celebrity and style, medicine and drugs, radicalism and Fascism and Freudianism and Communism and Americanism, that forms an indispensable key to modern culture. She was there when the Cuban Revolution began, and when the Berlin Wall came down; in Vietnam under American bombardment, in wartime Israel, in besieged Sarajevo. She was in New York when artists tried to resist the tug of money—and when many gave in. No writer negotiated as many worlds; no serious writer had as many glamorous lovers. Sontag tells these stories and examines the work upon which her reputation was based. It explores the agonizing insecurity behind the formidable public face: the broken relationships, the struggles with her sexuality, that animated—and undermined—her writing. And it shows her attempts to respond to the cruelties and absurdities of a country that had lost its way, and her conviction that fidelity to high culture was an activism of its own.

Utilizing hundreds of interviews conducted from Maui to Stockholm and from London to Sarajevo—and featuring nearly one hundred images—Sontag is the first book based on the writer’s restricted archives, and on access to many people who have never before spoken about Sontag, including Annie Leibovitz. It is a definitive portrait—a great American novel in the form of a biography.

Benjamin Moser was born in Houston. He is the author of Why This World: A Biography of Clarice Lispector, a finalist for the National Book Critics' Circle Award and a New York Times Notable Book. For his work bringing Clarice Lispector to international prominence, he received Brazil’s first State Prize for Cultural Diplomacy. He has published translations from French, Spanish, Portuguese, and Dutch. A former books columnist for Harper's Magazine and The New York Times Book Review, he has also written for The New Yorker, Conde Nast Traveler, and The New York Review of Books.

“A landmark biography, the first major reintroduction of an incomparable literary heavyweight to the public since her death.” — The New York Times

“Fascinating  . . . Moser’s biography of Sontag is an education in Sontag, but also in what Sontag wanted and why, as well as an education in the worlds that inspired her and fought her.” — Los Angeles Times

&#8220A skilled, lively, prodigiously researched book that, in the main, neither whitewashes nor rebukes its subject: It works hard to make the reader see Sontag as the severely complex person she was. [Moser] writes vividly of a woman of parts determined to leave a mark on her time; and makes us feel viscerally how large those parts were — the arrogance, the anxiety, the reach! No mean achievement.”
— Vivian Gornick, The New York Times Book Review

“Moser’s epic portrait of the iconic writer and critic winds through American history, entwining its subject to pivotal points in our culture and reshaping her legacy in the process.” — Entertainment Weekly, “20 New Books to Read in September”

“There can be no doubting the brilliance – the sheer explanatory vigour – of Moser’s biography . . . a triumph of the virtues of seriousness and truth-telling that Susan Sontag espoused again and again but was conspicuously and often quite consciously unable to force herself to live by.” — The New Statesman

“Persuasive and illuminating . . . does what a biography ought to do: it enriches our understanding of its subject.” — Los Angeles Review of Books

“Enlightening and finely tuned . . . because his tone is so reserved, so disinterested in passing judgement, none of what he writes about comes off as dishy or inappropriate. More to the point, his critical distance from his subject makes him an echo of Sontag herself.” — Mark Athitakis, On the Seawall

“A towering figure like Susan Sontag deserves a towering tome, and Moser’s 700-plus-page biography of the iconic cultural critic delivers . . . this blockbuster à la Stacy Schiff’s Cleopatra is both granular and grand—an opus fit for the writer-philosopher who ‘created the mold, and then she broke it.’” — O Magazine, “18 Must-Read Books of Fall 2019”

“Moser is a tenacious biographer, keeping a tight hold on his narrative and reaching firm conclusions. He is very tough-minded, as Sontag herself was at her best, and his mind is like Sontag’s in that he can make very sharp turns and land decisive blows.” — Nylon Magazine

“Monumental and stylish.” — The Atlantic

[Sontag] was avid, ardent, driven, generous, narcissistic, Olympian, obtuse, maddening, sometimes loveable but not very likeable. Moser has had the confidence and erudition to bring all these contradictory aspects together in a biography fully commensurate with the scale of his subject. He is also a gifted, compassionate writer. — Elaine Showalter, The Times Literary Supplement

Beautifully written and moving . . .[a] monumental achievement . . . This brilliant book matches Sontag’s own brilliance and finally gives her the biography she deserves. — BookPage

“Brilliant . . . We need [Sontag] now, more than ever, and this biography keeps her defiantly alive: argumentative, willful, often right, always interesting, encouraging us to up our game as we watch her at the top of hers.” — The Guardian

“Deft and sometimes dishy . . . If Moser’s Why This World: A Biography of Clarice Lispector was indispensable in greatly expanding the Brazilian writer’s profile and readership, especially in the US, then Sontag accomplishes something just as valuable: It deepens our understanding of a world-renowned eminence.” — BookForum

“Moser has managed the near-impossible feat of capturing Sontag in all of her dark brilliance and pointed contradictions.” — Interview

“Succeeds as it does—magnificently, humanely—by displaying the same intellectual purchase, curiosity, and moral capaciousness to which [Sontag] laid so inspiring and noble a claim over a lifetime. . . . graceful, tactful, scrupulous, unerringly insightful . . . Moser’s biography is a stunningly generous gift—to readers, obviously, but also to his subject. He is patient with her, truthful yet tender, recognizing both what was thrilling and what was cursed about her.” — ArtForum

“A landmark achievement—astonishing in its scope, brilliant in its perceptiveness, and a joy to read. It deserves to be counted among the best nonfiction books of 2019.” — Jewish Book Council

“Moser ably chronicles Sontag’s childhood, her youthful brilliance and glamour, her shaping of the public conversation—with essays and books like ‘Notes on ‘Camp’ and ‘Regarding the Pain of Others’—and her heroic efforts on behalf of the people of Sarajevo during the Bosnian war.” — Seattle Times

“Through it all, Moser tends to strike an effective balance between the kind of immersive detail Sontag specialists will eagerly expect and the kind of broader narrative momentum that ordinary readers will appreciate (and that might turn a few of them into Sontag specialists, always a pleasant side effect).” — Christian Science Monitor

“Engagingly written . . . With its personal details and gossip about New York literary parties, Moser’s biography both entertains and scandalizes.” — Mosaic

“Glorious . . . an epiphany of research and storytelling, the definitive life of a writer both more and less than the myth she fastidiously crafted. [A] luminous achievement.” — Minneapolis Star Tribune

“Don’t be fooled by the length. This book is compulsive reading: moving, maddening, ridiculous and beautiful scenes from the life of Susan Sontag, and the epochs she traversed. Moser has a true and deep love for his subject, a love unafraid to be truthful, and it shows.” — Rachel Kushner, author of The Flamethrowers

“If it’s already difficult to imagine American culture without Susan Sontag’s contributions to it, it may soon become difficult to imagine her life without Benjamin Moser’s account of it. A significant life like Sontag’s demands a significant biography. That demand has now been incisively, extravagantly met.” — Michael Cunningham, Pulitzer Prize-winning author of The Hours

“Moser’s accomplishment here is breathtaking: it includes an extraordinary knowledge of the subject, her milieu, her writings, her ideas, and her friends and family, beautiful prose, extraordinary insights, a capacity to understand her driven emotional life and her stellar intellectual life.” — Rebecca Solnit, author of Call Them By Their True Names and Men Explain Things to Me

“An astonishing page-turner, the last word on Susan Sontag. I can’t imagine the necessity of another book about her life.” — Sigrid Nunez, author of The Friend

“Sontag’s influence on aesthetics, writing and the wider culture is almost impossible to overstate and Moser’s monumental biography reveals the surprisingly tender, insecure, and intellectually dedicated story of one the most remarkable literary figures of twentieth century America. She stands reclaimed for our century in this definitive, fiercely intelligent work.” — Stephen Fry, author of The Ode Less Travelled

“Sontag made and broke the mold of American twentieth century public intellectual. In this long-awaited, brilliant biography, Moser shows us how to read Sontag—and, by extension, her times—and reveals the extents and limits of her genius. His psychologically nuanced critical study is written with sang-froid and compassion.” — Chris Kraus, author of After Kathy Acker and I Love Dick

“Moser brings his iconic subject to life in this gripping, insightful and supremely stylish biography… revealing at every turn the vital, complicated, imperfect human being behind the formidable public intellectual.” — Edmund Gordon, author of The Invention of Angela Carter: A Biography

“Who better than distinguished critic Moser, National Book Critics Circle finalist for Why This World: A Biography of Clarice Lispector, to write a biography of Susan Sontag?” — Library Journal (starred review)