The Bright Ages: A New History of Medieval Europe (Hardcover) 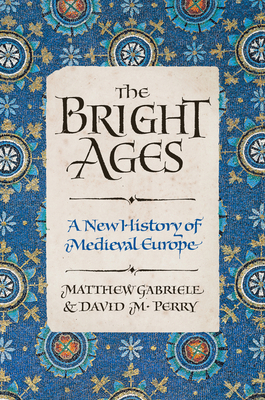 The Bright Ages: A New History of Medieval Europe (Hardcover)

"The beauty and levity that Perry and Gabriele have captured in this book are what I think will help it to become a standard text for general audiences for years to come….The Bright Ages is a rare thing—a nuanced historical work that almost anyone can enjoy reading.”—Slate

A lively and magisterial popular history that refutes common misperceptions of the European Middle Ages, showing the beauty and communion that flourished alongside the dark brutality—a brilliant reflection of humanity itself.

The word “medieval” conjures images of the “Dark Ages”—centuries of ignorance, superstition, stasis, savagery, and poor hygiene. But the myth of darkness obscures the truth; this was a remarkable period in human history. The Bright Ages recasts the European Middle Ages for what it was, capturing this 1,000-year era in all its complexity and fundamental humanity, bringing to light both its beauty and its horrors.

The Bright Ages takes us through ten centuries and crisscrosses Europe and the Mediterranean, Asia and Africa, revisiting familiar people and events with new light cast upon them. We look with fresh eyes on the Fall of Rome, Charlemagne, the Vikings, the Crusades, and the Black Death, but also to the multi-religious experience of Iberia, the rise of Byzantium, and the genius of Hildegard and the power of queens. We begin under a blanket of golden stars constructed by an empress with Germanic, Roman, Spanish, Byzantine, and Christian bloodlines and end nearly 1,000 years later with the poet Dante—inspired by that same twinkling celestial canopy—writing an epic saga of heaven and hell that endures as a masterpiece of literature today.

The Bright Ages reminds us just how permeable our manmade borders have always been and of what possible worlds the past has always made available to us. The Middle Ages may have been a world “lit only by fire” but it was one whose torches illuminated the magnificent rose windows of cathedrals, even as they stoked the pyres of accused heretics.

Matthew Gabriele is a professor of medieval studies and chair of the department of religion and culture at Virginia Tech. He is the author of the book An Empire of Memory: The Legend of Charlemagne, the Franks, and Jerusalem before the First Crusade, many articles on medieval Europe and the memory of the Middle Ages, and has edited several academic volumes. His public writing has appeared in numerous newspapers and magazines, and interviews with him have aired locally, nationally, and internationally.

David Perry is a journalist, medieval historian, and senior academic advisor in the history department at the University of Minnesota. He was formerly a professor of history at Dominican University. Perry is the author of Sacred Plunder: Venice and the Aftermath of the Fourth Crusade, and his writing on history, disability, politics, parenting, and other topics has appeared in the New York Times, the Washington Post, the Nation, the Atlantic, and CNN.com, among others.

“While all of this is the sort of stuff that professional medievalists love to see, the thing I like most about Perry and Gabriele’s effort is that it is fun. The Bright Ages is written in such an engaging and light manner that it is easy to race through. I found myself at the end of chapters faster than I wanted to be, completely drawn in by the narrative. You can tell how much the authors love the subject matter, and that they had a great time choosing stories to share and evidence to consider.” — Slate

"Incandescent and ultimately intoxicating, for as the chapters progress, it dawns on the reader that those who lived in this period were more conventional than cardboard figures. . . . They were, in essence, human." — Boston Globe

"This revisionist history of medieval Europe takes apart the myth of a savage, primitive period . . . with passion and verve, [Gabriele and Perry challenge] the reader to tackle assumptions, bias and prejudices about the past to create a more joined-up, inclusive picture of the thousand years that followed the sack of Rome." — Peter Frankopan, The Guardian

"The Bright Ages is a necessary book. It does the hard work of introducing audiences to a world that we too often overlook for expressly political reasons. It is also a joyful work. The medieval period, Perry and Gabriele argue, has good news for us. The world can be beautiful without centralized and brutal imperial power." — Los Angeles Review of Books

"....a magic carpet ride around all manner of medieval places and moments....Perry and Gabriele are particularly keen to wrestle the Middle Ages from the clutches of white supremacists and other dangerous forces that yearn for a full return to a simplified version of the period. And so the authors present the doings of clever and durable women, too often overlooked among the churning dynasties of the early Middle Ages." — Irish Examiner

“The Bright Ages shines a light on an age too often obscured by myth, legend, and fairy tales. Traveling easily through a thousand years of history, The Bright Ages reminds us society never collapsed when the Roman Empire fell, nor did the modern world wake civilization from a thousand-year hibernation. Gabriele and Perry show the medieval world was neither a romantic wonderland nor a deplorable dungeon, but instead a real world full of real people with hopes, dreams, and fears making the most of their time on earth.”  — Mike Duncan, author of Hero of Two Worlds: The Marquis de Lafayette in the Age of Revolution and The Storm Before the Storm: The Beginning of the End of the Roman Republic

“This book is perfect for people who are interested in the period but don't know where to start. Because the scale is sweeping but so well organized. . . . Most importantly, it's really entertaining, so. I recommend.” — Brandon Taylor, author of Real Life and Filthy Animals

"A lively, searing, and transformative reimagining of the medieval world, The Bright Ages is brilliant in every way, both lucid in its arguments and sparkling in its prose. A gripping and compulsive read." — Bruce Holsinger, author of A Burnable Book and The Gifted School

"In this engaging new history of the Medieval period Gabriele and Perry achieve a feat: they have written something eminently readable, suffused with academic rigor, and ethically responsible." — Candida Moss, author of The Myth of Persecution

"Historians Gabriele and Perry argue in this accessible revisionist history that the so-called Dark Ages was actually a period of innovation that helped pave the way for the Renaissance and Enlightenment. . . . They add nuance and complexity to popular conceptions of the Dark Ages and make clear that beauty and achievement existed among the horrors. This is a worthy introduction to an oft-misunderstood period in world history." — Publishers Weekly

"Although traditional politics-and–great-men history makes an appearance, the authors keep current by including a surprising number of great women and emphasizing their disapproval of racism, sexism, and slavery. The result is an appealing account of a millennium packed with culture, beauty, science, learning, and the rise and fall of empires." — Kirkus Reviews

"Noted medieval historians Gabriele and Perry provide an engaging overview of a complex, yet often oversimplified era....sure to become a new standard for those seeking a comprehensive and inclusive review of medieval times." — Booklist

"Matthew Gabriele and David M. Perry liberate the Middle Ages from stereotypes and half-truths in The Bright Ages, revealing that world as 'not simple or clean, but messy and human'....[a] lively account of a misunderstood era." — Shelf Awareness

"This accessible trip through the medieval world is well worth taking for anyone wishing to better understand its complexity." — Library Journal

"Chapter by chapter, Gabriele and Perry usher into view, from behind the curtain of the familiar grand narratives and from multiple locations, an eclectic cast of characters—many of them women—who exemplify, in a multitude of ways, a dazzling brightness where history has instructed us to see only gloom." — First Things