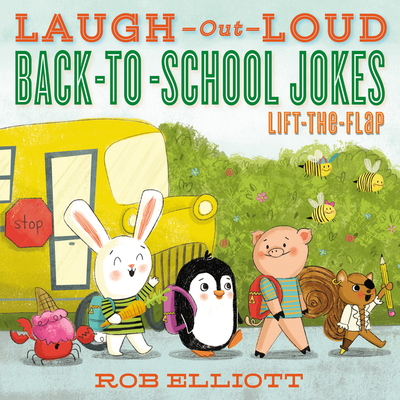 The #1 bestselling Laugh-Out-Loud Jokes for Kids series is bringing giggles to a whole new age group! Get ready for school with this beautifully illustrated lift-the-flap joke book. A great activity book for little ones, including anyone looking for a boredom buster when home from school.

Rob Elliott’s Laugh-Out-Loud Jokes for Kids series has sold more than 5 million copies. Now his fun-for-the-whole-family collection has been adapted for younger readers. Lift more than a dozen flaps to reveal school-themed jokes and puns that will keep class clowns cackling all year long!

This paperback book includes 13 back-to-school jokes specifically selected for the youngest of comedians and illustrated in full color by Mackenzie Haley. Lift the flaps to find the punchlines!

Rob Elliott is a trusted resource for funny jokes that are hugely popular with kids. As Brightly noted in a recommendation, his books have "knock-knock jokes, old classics, and even a few that you probably haven’t heard yet, which is a kindness for parents everywhere."

MacKenzie Haley is an illustrator, runner, and cat whisperer. She has her BFA in illustration from the University of Dayton. She's completed two full marathons (slowly), fostered about twelve cats (not at the same time), and has a codependent cat named Booger. She has drawn her whole life, and flunked a math test in the third grade because she turned the test over and used the entire time to draw characters and faces out of numbers. MacKenzie Haley currently resides in Louisville, KY.