Save-It-Forward Suppers: A Simple Strategy to Save Time, Money, and Sanity (Hardcover) 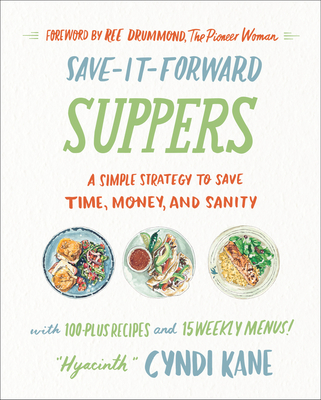 Save-It-Forward Suppers: A Simple Strategy to Save Time, Money, and Sanity (Hardcover)

Meal prep without burnout! Transform leftovers from each meal into a fresh new dish and put a home-cooked dinner on the table every night with 100-plus recipes and 15 easy weekly menus, in this first cookbook by Cyndi “Hyacinth” Kane, often seen on Ree Drummond’s hit Food Network show and blog, The Pioneer Woman.

Whether you enjoy cooking or not, it can be exhausting to cook a new meal from scratch every single night—especially if you have a family to feed. Batch cooking is a way around this but means that half your meals will be reheated leftovers, which gets unappetizing after a few days. Instead, Cyndi Kane uses her “Save-It-Forward” method to cut down on cooking time and food waste and still feed her family something new every night. She reserves components of each meal she cooks to play a part in her meal the next night, reimagining her leftovers without rehashing them.

In this beautiful, practical book, she provides 15 weekly menus for getting dinner on the table 5 to 6 days a week with as little fuss as possible, and her quirky, chatty tone makes meal prep fun, too. Each week is themed for the sort of week you expect to have, such as No Time to Spare, Mad Skills, and Simple Meats and Veggies. She follows four principles for each meal she puts in front of her family. Each dinner needs to meet the following criteria:

Each recipe is accompanied by beautiful watercolor illustrations showing the finished dishes and visual menus showing the Save-It-Forward connections between each meal. Some of the recipes (and transformations) included are:

Readers will feel like dinnertime superheroes with these low-stress, super-practical, time-saving meals!

Cyndi Kane (also known widely as “Hyacinth,” Ree Drummond’s best friend) has homeschooled her four children for nearly twenty years and has always had a side hustle of some sort—founder of a homeschool community, radio talk show host, entrepreneur. Her busy life necessitated a streamlined dinner regimen, so her expedited cooking methods were borne out of need (or desperation!). Cyndi’s and Ree’s families are “fifth-generation friends,” following in the footsteps of their parents, grandparents, and great grandparents-in-law; she is featured in Ree’s book Little Ree: Best Friends Forever!, has appeared at least a dozen times on Ree’s Food Network show The Pioneer Woman, and is frequently featured in The Pioneer Woman magazine on thepioneerwoman.com. Cyndi also founded an e-commerce site www.houseofhyacinth.com, where she partners with influencers to design, manufacture, and sell kitchen and tabletop accessories. She lives in Pawhuska and Oklahoma City, where her husband, John, is a Supreme Court Justice for the Oklahoma Supreme Court.

“Readers will enjoy Kane’s inventive ways of revitalizing leftovers. . . . Kane’s witty commentary . . . and amiable instructions . . . make for amusing encouragement along the way. This will be a lifesaver for busy home cooks.” — Publishers Weekly

“This [cookbook] hearkens back to the hard work, cozy flavors, and some convenience ingredients that may remind some readers of the kitchens of their childhood while incorporating a range of popular modern American dishes. . . . Recipe instructions are chatty, encouraging, and include plenty of homey, hard-won homemaker wisdom that recommends this to those aspiring to the role of dedicated home cook. ” — Booklist