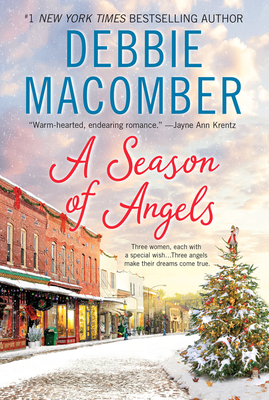 From the #1 New York Times and USA Today bestselling author Debbie Macomber comes a beautiful repackage of the classic novel that started it all.

Wishes for love bring hope from above.

Shirley, Goodness, and Mercy—three willing but sometimes wayward angels—are each given someone's prayer to answer . . .

Shirley: She's sent to help nine-year-old Timmy Potter, who longs for a new father. And although his mother, Jody, has vowed never to trust any man, Shirley is determined to help her love again.

Goodness: She knows Monica Fischer longs for a husband and home of her own, but the young woman has practically given up on finding the right man to stand by her side . . . until Goodness steps in to help.

Mercy: Can Mercy bring hope back into Leah Lundberg's life? This maternity nurse desperately wants a child to fill up the home she’s made with her husband, Andrew.

But there's just one catch: Each angel must teach her charge a memorable lesson before the prayer can be granted . . .

Debbie Macomber has more than 100 million copies of her books in print, and her stories about home and family have a worldwide audience and have been translated into twenty-three languages. In addition to being a #1 New York Times bestseller in fiction many times over, she also has an enormous following among knitters as the author of dozens of pattern and craft books. In 2008, she launched a branded line of knitting products through Leisure Arts, the company that publishes her knitting guides. Debbie and her husband, Wayne, have four children and nine grandchildren, and split their time between Washington State and Florida. This is Debbie’s second picture book co-authored with Mary Lou Carney; their first, The Truly Terribly Horrible Sweaer . . . That Grandma Knit, was published in 2009.