The Big Texas Cookbook: The Food That Defines the Lone Star State (Hardcover) 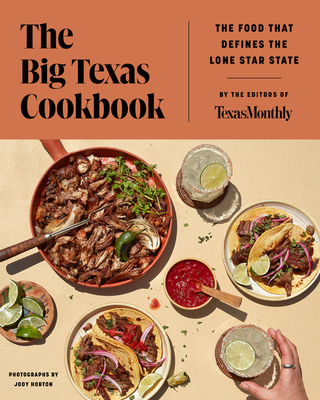 The Big Texas Cookbook: The Food That Defines the Lone Star State (Hardcover)

By Editors of Texas Monthly

The editors of Texas Monthly celebrate the ever-evolving culinary landscape of the Lone Star State in this stunning cookbook, featuring more than 100 recipes, gorgeous color photos, and insightful essays.

When it comes to food, Texas may be best known for its beloved barbecue and tacos. But at more than 29 million people, the state is one of the most culturally diverse in America—and so is its culinary scene. From the kolaches introduced by Czechs settlers to the Hill Country in the 1800s to the Viet-Cajun crawfish that Vietnamese immigrants blessed Houston with in the early 2000s, the tastes on offer here are as vast and varied as the 268,596 square miles of earth they spring from.

In The Big Texas Cookbook, the editors of the award-winning magazine Texas Monthly have gathered an expansive collection of recipes that reflects the state’s food traditions, eclectically grouped by how Texans like to start and end the day (Rise and Shine, There Stands the Glass), how they revere their native-born ingredients (Made in Texas), and how they love the people, places, and rituals that surround their favorite meals (On Holiday, Home Plates). Getting their very own chapters—no surprise—are the behemoths mentioned above, barbecue and Tex-Mex (Smoke Signals, Con Todo). With recipes for über-regional specialties like venison parisa, home cooking favorites like King Ranch casserole, and contemporary riffs like a remarkable Lao beef chili, The Big Texas Cookbook pays homage to the cooks who long ago shaped the state’s food culture and the ones who are building on those traditions in surprising and delightful ways.

Packed with atmospheric photos, illustrations, and essays, The Big Texas Cookbook is a vivid culinary portrait of the land, its people, and its past, present, and future.

TexasMonthly is one of the most respected publications in the nation and has won fourteen National Magazine Awards. Since 1973, its legendary roster of contributors has chronicled life in contemporary Texas, publishing long-form literary storytelling alongside in-depth analysis on vital issues and indispensable advice on Texas living.

"You would think for a state as big and diverse as Texas that no single cookbook could truly capture all it has to offer, but you would be wrong. The Big Texas Cookbook is just what the name promises – a large book filled with recipes, stories and lush photos that depict the beauty of Texas food, chefs, and culinary traditions.  Whether you live in the Lone Star State or you have a hankering for our food, this book is a must-have for your collection."  — Tracy Vaught, restaurateur, and Hugo Ortega, executive chef, Hugo’s, Caracol, and Xochi, Houston

"The Big Texas Cookbook celebrates the wonderfully diverse and culturally nuanced food of Texas with a mouth-watering collection of recipes from across the state." — Lisa and Tom Perini, owners, Perini Ranch Steakhouse, Buffalo Gap

“What is Texan food? That was a complex question one hundred years ago and it’s even harder to answer today. But The Big Texas Cookbook nails it. Texas in every sense is broad, deep, roomy, and inclusive: from Hill Country barbecue and a bowl of Texas red to kolaches and Tex-namese crawfish boils, it's all here. Delicious recipes? Absolutely. A new definition of what it means to be Texan exemplified by the food itself? Hell yes!” — Andrew Zimmern, James Beard Award-winning TV personality, chef, and author

"The editors of Texas Monthly deliver reader favorites from the magazine’s 50-year history, as well as stunning recipes that highlight the culinary influence of the immigrants who call the state home. . . .Those who crave bold flavors will relish this collection of Lone Star exceptionalism." — Publishers Weekly, starred review