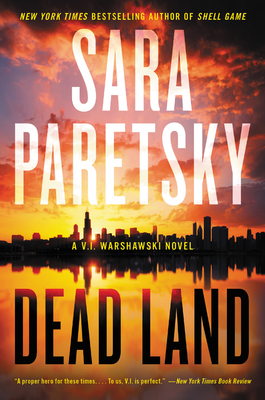 NAMED A BEST BOOK OF THE YEAR BY THE WASHINGTON POST

"Sara Paretsky’s gloriously kick-ass private eye, V.I. “Vic” Warshawski, is back . . . in a political-rot thriller that’s the definition of perfection in the genre." — THE WASHINGTON POST

Chicago’s legendary detective, V.I. Warshawski, knows her city’s rotten underbelly better than most, but she’s unable to avoid it when her goddaughter drags her into a fight over lakefront land use, in this propulsive novel from New York Times bestseller Sara Paretsky.

Chicago may be the city of broad shoulders, but its political law is “Pay to Play.” Money changes hands in the middle of the night, and by morning, buildings and parks are replaced by billion-dollar projects.

Chicago PI V.I. Warshawski gets pulled into one of these clandestine deals through her impetuous goddaughter, Bernie Fouchard. Bernie tries to rescue Lydia Zamir, a famed singer-songwriter now living on the streets; Zamir’s life fell apart when her lover was murdered next to her in a mass shooting at an outdoor concert. Not only does Bernie plunge her and V.I. headlong into the path of some ruthless developers, they lead to the murder of the young man Bernie is dating. He’s a computer geek working for a community group called SLICK.

V.I. is desperate to find a mysterious man named Coop, who roams the lakefront in the middle of the night with his dog. She’s sure he holds the key to the mounting body count within SLICK. Coop may even know why an international law firm is representing the mass murderer responsible for Lydia’s lover’s death. Instead, the detective finds a terrifying conspiracy stretching from Chicago’s parks to a cover-up of the dark chapters in America’s meddling in South American politics. Before she finds answers, this electrifying novel pushes V.I. close to the breaking point: People who pay to play take no prisoners.

“A proper hero for these times . . . To us, V.I. is perfect. . . . Paretsky is justly praised for referencing vital social issues in her mysteries, but here we also get a taste of her flair for creating offbeat but believable characters.” — The New York Times Book Review on Dead Land

"Sara Paretsky’s gloriously kick-ass private eye, V.I. “Vic” Warshawski, is back for the 20th time in a political-rot thriller that’s the definition of perfection in the genre. . . .  The novel’s robustly flavorsome cast of characters includes a semi-deranged land preservationist, a corrupt Nobel Prize winner, a Chilean Ayn Rand disciple and several wonderful dogs." — The Washington Post on Dead Land

“As usual, Paretsky is less interested in identifying whodunit than in uncovering a monstrous web of evil, and this web is one of her densest and most finely woven ever. So fierce, ambitious, and far-reaching that it makes most other mysteries seem like so many petit fours.” — Kirkus Reviews on Dead Land

“Enjoy the fun of solving the mystery and rooting for Warshawski to bring down the bad guys. . . . [Dead Land] will please fans of the series and readers who enjoy tough women PIs.” — Library Journal on Dead Land

“Legendary V.I. Warshawski is as dogged and ferocious as ever. So is Sara Paretsky, who is at the top of her crime novel game.” — C.J. Box

“Among today’s P.I.’s, nobody comes close to Warshawski.” — Publishers Weekly

“Wonderful company and a rich discovery awaiting those who have yet to meet [Warshawski]. ” — Los Angeles Times