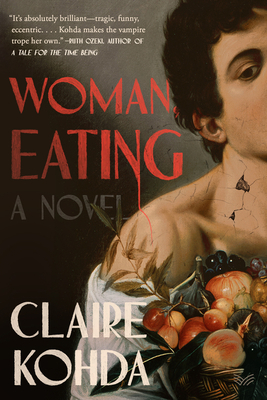 “A subtle, understated vampire book. Lydia is mixed-race, mixed-species, and trying to make it on her own. Her hunger and desire to be human lead to complicated relationships with food and her friends. This one’s oh-so-satisfying.”
— Maggie Henriksen, Carmichael's Bookstore, Louisville, KY

An IndieNext Pick! A Best Book of 2022 in Harper’s Bazaar, Daily Mail, Glamour, and Thrillist!

Most Anticipated of 2022 in The Millions, Ms. Magazine, LitHub

A young, mixed-race vampire must find a way to balance her deep-seated desire to live amongst humans with her incessant hunger in this stunning debut novel from a writer-to-watch.

Lydia is hungry. She's always wanted to try Japanese food. Sashimi, ramen, onigiri with sour plum stuffed inside - the food her Japanese father liked to eat. And then there is bubble tea and iced-coffee, ice cream and cake, and foraged herbs and plants, and the vegetables grown by the other young artists at the London studio space she is secretly squatting in. But, Lydia can't eat any of these things. Her body doesn't work like those of other people. The only thing she can digest is blood, and it turns out that sourcing fresh pigs' blood in London - where she is living away from her vampire mother for the first time - is much more difficult than she'd anticipated.

Then there are the humans - the other artists at the studio space, the people at the gallery she interns at, the strange men that follow her after dark, and Ben, a boyish, goofy-grinned artist she is developing feelings for. Lydia knows that they are her natural prey, but she can't bring herself to feed on them. In her windowless studio, where she paints and studies the work of other artists, binge-watches Buffy the Vampire Slayer and videos of people eating food on YouTube and Instagram, Lydia considers her place in the world. She has many of the things humans wish for - perpetual youth, near-invulnerability, immortality – but she is miserable; she is lonely; and she is hungry - always hungry.

As Lydia develops as a woman and an artist, she will learn that she must reconcile the conflicts within her - between her demon and human sides, her mixed ethnic heritage, and her relationship with food, and, in turn, humans - if she is to find a way to exist in the world. Before any of this, however, she must eat.

“Absolutely brilliant – tragic, funny, eccentric and so perfectly suited to this particularly weird time. Claire Kohda takes the vampire trope and makes it her own in a way that feels fresh and original. Serious issues of race, disability, misogyny, body image, sexual abuse are handled with subtlety, insight, and a lightness of touch. The spell this novel casts is so complete I feel utterly, and happily, bitten.” -- Ruth Ozeki, Booker-shortlisted author of A Tale for the Time Being

Claire Kohda is an English writer and musician. She reviews books for publications including The Guardian and The TLS. As a violinist, she has played with Jessie Ware, RY X, Pete Tong, the London Contemporary Orchestra and The English Chamber Orchestra, amongst others, and on various film soundtracks.

“One of the most original vampire novels in ages, Claire Kohda’s Woman, Eating follows Lydia, a British, Japanese and Malaysian vampire struggling to survive. . . . Kohda has given Lydia a host of great vampire qualities, such as excellent night vision and an ability to experience the entire life of a creature by drinking its blood. But it’s Kohda’s exploration of Lydia’s inner world, the pain and longing she feels as an outsider, that makes Woman, Eating such a delicious novel.”
— New York Times Book Review

"Absolutely brilliant – tragic, funny, eccentric and so perfectly suited to this particularly weird time. Claire Kohda takes the vampire trope and makes it her own in a way that feels fresh and original. Serious issues of race, disability, misogyny, body image, sexual abuse are handled with subtlety, insight, and a lightness of touch, and the novel is ridiculously suspenseful! I was on the edge of my seat, just waiting for Lyd to bite someone, and in the end, I felt utterly and happily bitten." — Ruth Ozeki, author of A Tale for the Time Being

"The most unusual, original and strikingly contemporary vampire novel to come along in years." — The Guardian

"Unsettling, sensual, subversive, Woman, Eating turns the vampire trope on its head with its startlingly original female protagonist, caught between two worlds. It is a profound meditation on alienation and appetite, and what it means to be a young woman who experiences life at an acute level of intensity and awareness. Claire Kohda's prose is biting, yet lush and gorgeous. I was uncomfortably smitten." — Lisa Harding, author of Jenna Book Club Pick Bright Burning Things

"We’ve seen sexy vampires, scary vampires and psychic vampires, but never one quite like the one in this ambitious debut....With wit and a poet’s eye, Kohda examines cravings, desire and emptiness.”
— New York Times

"The chief trait that Lydia, the protagonist of this artful vampire novel, shares with monsters of old is hunger. . . . As Lydia encounters new people, including a pleasant artist turned property manager, and a new boss, a man with more influence than decency, she comes to understand what it is to become something 'that is neither demon nor human.'”
— New Yorker

"We have here a vampire book that will scrub any trace of Twilight from your mind—Claire Kohda’s debut follows a young vampire dealing with all kinds of hunger: for acceptance, for artistic success, and for sushi." — Glamour

"What Stoker did for the vampire at the end of the nineteenth century, Claire Kohda does for it in our own era….[T]here is much here to mesmerize and beguile readers, not least in Kohda’s prose, which is patient, strange, and altogether persuasive." — Times Literary Supplement (London)

"If you’re looking for a new read, then you have to read Claire Kohda’s novel, Woman, Eating. This novel has been making the rounds of various “Favorites” lists, and for very good reason: it’s a personable and unique take on what modern vampirism could look like. . . . Lydia was a mixed-Asian woman who learned how to be true to herself, to live unshackled to the colonialist society that had contained her. And now, she could finally live, not as the beast she was raised to think she was, but as Lydia, a clever, creative, and cunning young woman.” — The Mary Sue

"A magnificent debut." — The Millions

"Presenting a genuinely fresh take on the vampire mythos is an exceedingly difficult task in a post-Twilight world of bloodsucker rehash, not to mention enduring classic representation, but that’s precisely what Kohda manages in her debut novel....A delicate, consistently surprising riff on the vampire narrative, and a stealthy, subversive story of one young woman’s declaration of self." — Library Journal (starred review)

"Woman, Eating deals a lot with food, hunger, and Lydia’s relationship to her body. But this novel also deals with spiritual nourishment, art, womanhood, shame, and identity. . . . Kohda’s prose will take you on a deep emotional journey. Trust me, this is not your average vampire story—it is a novel that displays the incredible breadth of what speculative fiction can show us about the human condition." — Tor.com

"The way food wends its way throughout this piece is such a fascinating way to explore hunger, various appetites, and even identity. I regret to inform you that this one's not out until the spring, but I believe it's well worth the preorder."  — Book Riot

“Kohda has created a provocative, sympathetic, and satisfying dive into the mind of an unusual young woman at a crossroads.”
— Booklist

“Claire Kohda’s debut is a deeply moving contemplation on love, food, art, and what it means to be alive. It’s also a vampire novel. . . . Lyd wants a different relationship to art and to life, she wants to make her own art and although she yearns for human community, she must learn to experience life in the best way she can, by devouring it.” — Brooklyn Rail

“In this enjoyable debut novel, Kohda presents Lydia’s thirst for blood as a tidy metaphor for more common cravings. The protagonist’s discomfort with her condition comes across as quite realistic in what is essentially a coming-of-age novel. The author is particularly deft at illustrating how unacknowledged desire will out, undermining our best intentions.”
— Arts Fuse