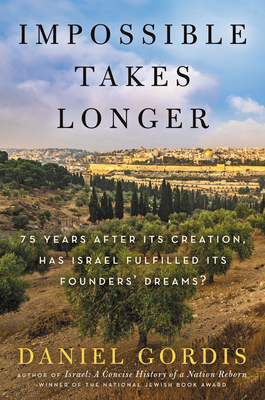 Published on the country’s seventy-fifth anniversary comes a nuanced and thoughtful examination of Israel’s past, present, and future, from the two-time National Jewish Book Award–winning author of Israel

In 1948, Israel’s founders had in mind much more than creating a state. They sought not mere sovereignty but also the creation of a “national home for the Jewish people,” where Jewish life would be transformed and where a “new Jew” would take root. Did they succeed? The state they created, says Daniel Gordis, is “the most hated nation in the world but also the most beloved,” a place of extraordinary success and maddening disappointment, a story of both unprecedented human triumph and great suffering.

Now, as the country marks its seventy-fifth anniversary, Gordis asks: Has Israel fulfilled the dreams of its founders? Using the country’s Declaration of Independence as his measure, he provides a thorough, balanced perspective on the ways in which the Israel of today exceeds the country’s original aspirations and also how it has fallen short. In a deft and multifaceted assessment, he discusses the often-overlooked reasons for Israel’s creation, the flourishing of Jewish and Israeli culture, Israel’s economy and its transformative tech sector, the Israeli-Palestinian conflict, the distinctly Israeli form of Judaism that has emerged in the Jewish state, Israel’s complex relationship with the Diaspora, and much more.

Gordis offers new angles of thinking about Israel that bring moderation and clarity to the prevailing discourse. And through weighing Israel’s successes, critiquing its failures, and acknowledging its inherent contradictions, he ultimately suggests that—in ways its founders could not have foreseen—the Jewish state is a success far beyond anything they could have imagined.

Daniel Gordis is the Koret Distinguished Fellow at Shalem College—Israel’s first liberal arts college—which he helped found in 2007. The author of numerous books on Jewish thought and political currents in Israel, he has twice won the National Jewish Book Award, including the prize for Book of the Year for Israel: A Concise History of a Nation Reborn. Raised and educated in the United States, he has been living in Jerusalem since 1998.

“Unusual verve and deep knowledge. . . . Through his lucid prose we learn about the competing views of Judaism envisioned by Americans and Israelis. . . . [An] academic yet accessible book.” — Jewish Book Council

“Those anguished by the rift between Israelis and American Jews might be surprised to learn it was ever thus. With empathy and deep historical insight, Daniel Gordis traces the roots and development of this disconnect and imagines a future of deepened mutual appreciation aimed at sustaining one unified Jewish people.” — Daniel Shapiro, Former US Ambassador to Israel

“The author loves his adopted homeland without ignoring its blemishes. He treats the most contested episodes in Israeli history, such as the plight of both Arab and Jewish refugees during the 1948 War of Independence, honestly and fairly.” — Wall Street Journal

“Like Israel itself, Daniel Gordis’ Israel is audacious, intensive and unique. It tells the breathtaking story of the third Jewish commonwealth from the very beginning to today. Anyone interested in the history of Zionism will find priceless information and profound insight in this much needed, fair and balanced book.” — Ari Shavit, author of My Promised Land