The Philharmonic Gets Dressed (Paperback) 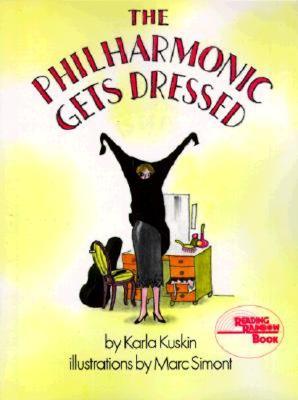 The Philharmonic Gets Dressed (Paperback)

"It is almost Friday night. Outside, the dark is getting darker," and here and there around the city ninety-two men and thirteen women are getting dressed to go to work. First they bathe and put on their underwear. Then they don special black-and-white apparel. Then when the one hundred and five people are completely ready, each takes a musical instrument and travels to midtown. There, at 8:30 tonight, they will work together: playing.

In these pages Karla Kuskin and Marc Simont combine their talents to give us a delightful and unusual inside view of one way an orchestra prepares.

Karla Kuskin wrote more than fifty books for children, including the Philharmonic Gets Dressed, Green as a Bean, and Moon, Have You Met My Mother She was the winner of the NCTE Award for Excellence in Poetry, among other honors. And once, long ago, may have given her son a woolly red hat.

Marc Simont was born in 1915 in Paris. His parents were from the Catalonia region of Spain, and his childhood was spent in France, Spain, and the United States. Encouraged by his father, Joseph Simont, an artist and staff illustrator for the magazine L'Illustration, Marc Simont drew from a young age. Though he later attended art school in Paris and New York, he considers his father to have been his greatest teacher.

When he was nineteen, Mr. Simont settled in America permanently, determined to support himself as an artist. His first illustrations for a children's book appeared in 1939. Since then, Mr. Simont has illustrated nearly a hundred books, working with authors as diverse as Margaret Wise Brown and James Thurber. He won a Caldecott Honor in 1950 for illustrating Ruth Krauss's The Happy Day, and in in 1957 he was awarded the Caldecott Medal for his pictures in A Tree is Nice, by Janice May Udry.

Internationally acclaimed for its grace, humor, and beauty, Marc Simont's art is in collections as far afield at the Kijo Picture Book Museum in Japan, but the honor he holds most dear is having been chosen as the 1997 Illustrator of the Year in his native Catalonia. Mr. Simont and his wife have one grown son, two dogs and a cat. They live in West Cornwall, Connecticut. Marc Simont's most recent book is The Stray Dog.