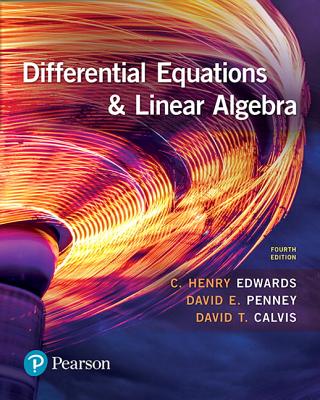 
Special Order—Subject to Availability
(This book cannot be returned.)
For courses in Differential Equations and Linear Algebra . Concepts, methods, and core topics covering elementary differential equations and linear algebra through real-world applications In a contemporary introduction to differential equations and linear algebra, acclaimed authors Edwards and Penney combine core topics in elementary differential equations with concepts and methods of elementary linear algebra. Renowned for its real-world applications and blend of algebraic and geometric approaches, Differential Equations and Linear Algebra introduces you to mathematical modeling of real-world phenomena and offers the best problems sets in any differential equations and linear algebra textbook. The 4th Edition includes fresh new computational and qualitative flavor evident throughout in figures, examples, problems, and applications. Additionally, an Expanded Applications website containing expanded applications and programming tools is now available.
About our authors Henry Edwards is emeritus professor of mathematics at the University of Georgia. He earned his Ph.D. at the University of Tennessee in 1960, and recently retired after 40 years of classroom teaching (including calculus or differential equations almost every term) at the universities of Tennessee, Wisconsin, and Georgia, with a brief interlude at the Institute for Advanced Study (Princeton) as an Alfred P. Sloan Research Fellow. He has received numerous teaching awards, including the University of Georgia's honoratus medal in 1983 (for sustained excellence in honors teaching), its Josiah Meigs award in 1991 (the institution's highest award for teaching), and the 1997 statewide Georgia Regents award for research university faculty teaching excellence. His scholarly career has ranged from research and dissertation direction in topology to the history of mathematics to computing and technology in the teaching and applications of mathematics. In addition to being author or co-author of calculus, advanced calculus, linear algebra, and differential equations textbooks, he is well-known to calculus instructors as author of The Historical Development of the Calculus (Springer-Verlag, 1979). During the 1990s he served as a principal investigator on three NSF-supported projects: (1) A school mathematics project including Maple for beginning algebra students, (2) A Calculus-with-Mathematica program, and (3) A MATLAB-based computer lab project for numerical analysis and differential equations students. David E. Penney, University of Georgia, completed his Ph.D. at Tulane University in 1965 (under the direction of Prof. L. Bruce Treybig) while teaching at the University of New Orleans. Earlier he had worked in experimental biophysics at Tulane University and the Veteran's Administration Hospital in New Orleans under the direction of Robert Dixon McAfee, where Dr. McAfee's research team's primary focus was on the active transport of sodium ions by biological membranes. Penney's primary contribution here was the development of a mathematical model (using simultaneous ordinary differential equations) for the metabolic phenomena regulating such transport, with potential future applications in kidney physiology, management of hypertension, and treatment of congestive heart failure. He also designed and constructed servomechanisms for the accurate monitoring of ion transport, a phenomenon involving the measurement of potentials in microvolts at impedances of millions of megohms. Penney began teaching calculus at Tulane in 1957 and taught that course almost every term with enthusiasm and distinction until his retirement at the end of the last millennium. During his tenure at the University of Georgia he received numerous University-wide teaching awards as well as directing several doctoral dissertations and seven undergraduate research projects. He was the author of research papers in number theory and topology and was the author or co-author of textbooks on calculus, computer programming, differential equations, linear algebra, and liberal arts mathematics. David T. Calvis is Professor of Mathematics at Baldwin Wallace University near Cleveland, Ohio. He completed a Ph.D. in complex analysis from the University of Michigan in 1988 under the direction of Fred Gehring. While at Michigan he also received a Master's degree in Computer, Information, and Control Engineering. Having initially served at Hillsdale College in Michigan, he has been at Baldwin Wallace since 1990, most recently assisting with the creation of an Applied Mathematics program there. He has received a number of teaching awards, including BWU's Strosacker Award for Excellence in Teaching and Student Senate Teaching Award. He is the author of a number of materials dealing with the use of computer algebra systems in mathematics instruction, and has extensive classroom experience teaching differential equations and related topics.