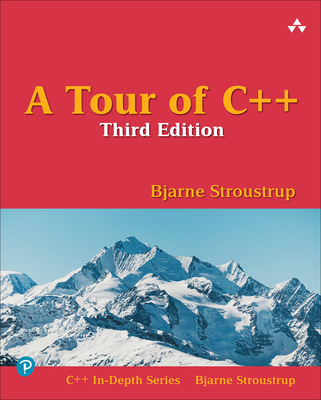 
Not On Our Shelves—Ships in 1-5 Days
In A Tour of C++, Third Edition, Bjarne Stroustrup provides an overview of ISO C++, C++20, that aims to give experienced programmers a clear understanding of what constitutes modern C++. Featuring carefully crafted examples and practical help in getting started, this revised and updated edition concisely covers most major language features and the major standard-library components needed for effective use. Stroustrup presents C++ features in the context of the programming styles they support, such as object-oriented and generic programming. His tour is remarkably comprehensive. Coverage begins with the basics, then ranges widely through more advanced topics, emphasizing newer language features. This edition covers many features that are new in C++20 as implemented by major C++ suppliers, including modules, concepts, coroutines, and ranges. It even introduces some library components in current use that are not scheduled for inclusion in the standard until C++23. This authoritative guide does not aim to teach you how to program (for that, see Stroustrup's Programming: Principles and Practice Using C++, Second Edition), nor will it be the only resource you'll need for C++ mastery (for that, see Stroustrup's The C++ Programming Language, Fourth Edition, and recommended online sources). If, however, you are a C or C++ programmer wanting greater familiarity with the current C++ language, or a programmer versed in another language wishing to gain an accurate picture of the nature and benefits of modern C++, you won't find a shorter or simpler introduction.
Bjarne Stroustrup is the designer and original implementer of C++ and the author of Programming: Principles and Practice Using C++, Second Edition, and The C++ Programming Language, Fourth Edition, among others. Currently a professor at Columbia University, he has previously worked at AT&T Bell Labs, Texas A&M University, and Morgan Stanley. He is the recipient of numerous honors, including The National Academy of Engineering's Charles Stark Draper Prize for Engineering "for conceptualizing and developing the C++ programming language." Dr. Stroustrup is a member of the National Academy of Engineering, a fellow of IEEE, ACM, CHM, and Churchill College Cambridge.