My Soul Is Rested: Movement Days in the Deep South Remembered (Paperback) 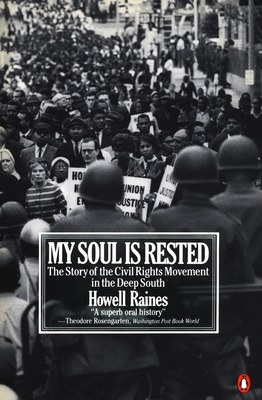 My Soul Is Rested: Movement Days in the Deep South Remembered (Paperback)


Not On Our Shelves—Ships in 1-5 Days
The almost unfathomable courage and the undying faith that propelled the Civil Rights Movement are brilliantly captured in these moving personal recollections. Here are the voices of leaders and followers, of ordinary people who became extraordinary in the face of turmoil and violence. From the Montgomery Bus Boycott in 1956 to the death of Martin Luther King, Jr., in 1968, these are the peeople who fought the epic battle: Rosa Parks, Andrew Young, Ralph Abernathy, Hosea Williams, Fannie Lou Hamer, and others, both black and white, who participated in sit-ins, Freedom Rides, voter drives, and campaigns for school and university integration.

Here, too, are voices from the "Down-Home Resistance" that supported George Wallace, Bull Connor, and the "traditions" of the Old South—voices that conjure up the frightening terrain on which the battle was fought. My Soul is Rested is a powerful document of social and political history, as well as a magnificent tribute to those who made history happen.

Before stepping down in 2003, Howell Raines was executive editor of The New York Times. He is the author of Whiskey Man, a novel, and My Soul Is Rested, an oral history of the Civil Rights movement. He was awarded the Pulitzer Prize for feature writing in 1992.
"So touching, so exhilirating … no book for a long time has left me so moved or so happy."
—Anthony Lewis, The New York Times Book Review

"Remarkable … the realities of our social history are described in a kind of magnificent humaneness."
—Chicago Tribune Book World