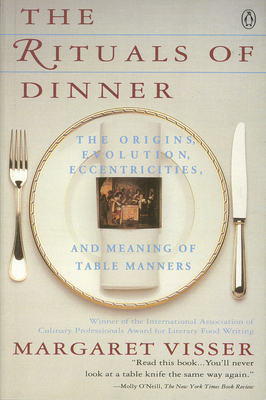 
Special Order—Subject to Availability
With an acute eye and an irrepressible wit, Margaret Visser takes a fascinating look at the way we eat our meals. From the ancient Greeks to modern yuppies, from cannibalism and the taking of the Eucharist to formal dinners and picnics, she thoroughly defines the eating ritual.

Margaret Visser is a writer and broadcast with a particular interest in the mythology of everyday life. Her books include The Gift of Thanks, Much Depends on Dinner, The Rituals of Dinner, The Way We Are, and The Geometry of Love. Many of these have been bestsellers and have won major international awards, including the Glenfiddich Award for Foodbook of the Year in Britain in 1989, the International Association of Culinary Professionals' Literary Food Writing Award, and the Jane Grigson Award. Her Massey Lectures on CBC radio were later published as the bestselling book Beyond Fate. Visser's books have been translated into French, German, Dutch, Spanish, Italian, and Portuguese. She frequently appears on radio and television, and has lectured extensively throughout North America, Europe, and Australia.