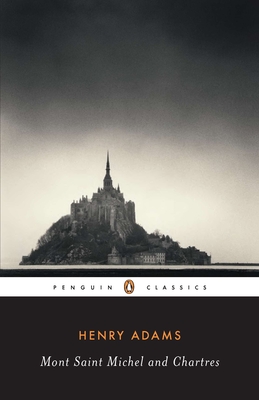 
On Our Shelves Now at:
Mont Saint Michel and Chartres is a record not of a literal jouney but of a meditative journey across time and space into the medieval imagination. Using the architecture, sculpture, and stained glass of the two locales as a starting point, Adams breathes life into what others might see merely as monuments of a past civilization. With daring and inventive conceits, Adams looks at the ordinary people, places, and events in the context of the social conventions and systems of thought and belief of the thirteenth century turning the study of history into a kind of theater.

As Raymond Carney discusses in his introduction, Adams' freeedom from the European traditions of study lends an exuberance—and puckish wit—to his writings.

Born in 1838 into one of the oldest and most distinguished families in Boston, a family which had produced two American presidents, Henry Adams had the opportunity to pursue a wide-ranging variety of intellectual interests during the course of his life. Functioning both in the world of practical men and afffairs (as a journalist and an assistant to his father, who was an American diplomat in Washinton and London), and in the world of ideas (as a prolific writer, the editor of the prestigious North American Review, and a professor of medieval, european, and American history at Harvard), Adams was one of the few men of his era who attempted to understand art, thought, culture, and history as one complex force field of interacting energies. His two masterworks in this dazzling effort are Mont Saint Michel and Chartres and The Education of Henry Adams, published one after the other in 1904 and 1907. Taken together they may be read as Adams' spiritual autobiography—two monumental volumes in which he attempts to bring together into a vast synthesis all of his knowledge of politics, economics, psychology, science, philosophy, art, and literature in order to attempt to understand the individual's place in history and society. They constitute one of the greatest historical and philosophical meditations on the human condition in all of literature.

Raymond Carney is well known for his writing on the relationships between American art, thought, and culture. He has been a Fellow of the National Endowment for the Humanities, served as an artistic consultant to the Whitney Museum of American Art, and written extensively on American and British poetry, ficiton, drama, dance, painting, and film. His two most recent books are American Dreaming (University of California Press) and Figures of Desire (Cambridge University Press). He teaches at Middlebury College in Vermont.