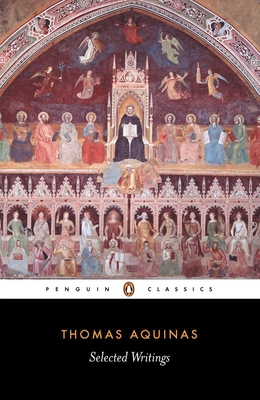 
Special Order—Subject to Availability
In his reflections on Christianity, Saint Thomas Aquinas forged a unique synthesis of ancient philosophy and medieval theology. Preoccupied with the relationship between faith and reason, he was influenced both by Aristotle's rational world view and by the powerful belief that wisdom and truth can ultimately only be reached through divine revelation. Thomas's writings, which contain highly influential statements of fundamental Christian doctrine, as well as observations on topics as diverse as political science, anti-Semitism and heresy, demonstrate the great range of his intellect and place him firmly among the greatest medieval philosophers.

For more than seventy years, Penguin has been the leading publisher of classic literature in the English-speaking world. With more than 1,700 titles, Penguin Classics represents a global bookshelf of the best works throughout history and across genres and disciplines. Readers trust the series to provide authoritative texts enhanced by introductions and notes by distinguished scholars and contemporary authors, as well as up-to-date translations by award-winning translators.
Thomas Aquinas (1225-74) was an Italian philosopher and Dominican friar.

Ralph McInerny is Professor of Medieval Studies at the University of Notre Dame. Pre-eminent as a Thomas scholar, his many books include Aquinas Against the Averroists and A First Glance at St Thomas Aquinas.
"There are readers of Aquinas's works, but Penguin's surpasses all by its sheer size, the very representative choice of texts, the excellent translations, and scholarly, informative introductions." —Albert E. Gunn