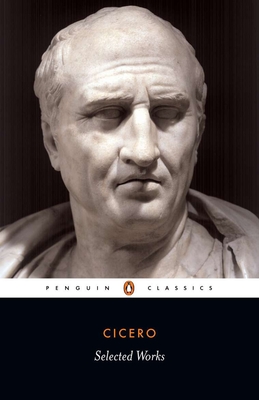 
In Stock—Click for Locations
Collecting the most incisive and influential writings of one of Rome's finest orators, Cicero's Selected Works is translated with an introduction by Michael Grant in Penguin Classics.

Lawyer, philosopher, statesman and defender of Rome's Republic, Cicero was a master of eloquence, and his pure literary and oratorical style and strict sense of morality have been a powerful influence on European literature and thought for over two thousand years in matters of politics, philosophy, and faith. This selection demonstrates the diversity of his writings, and includes letters to friends and statesmen on Roman life and politics; the vitriolic Second Philippic Against Antony; and his two most famous philosophical treatises, On Duties and On Old Age - a celebration of his own declining years. Written at a time of brutal political and social change, Cicero's lucid ethical writings formed the foundation of the Western liberal tradition in political and moral thought that continues to this day.

For more than seventy years, Penguin has been the leading publisher of classic literature in the English-speaking world. With more than 1,700 titles, Penguin Classics represents a global bookshelf of the best works throughout history and across genres and disciplines. Readers trust the series to provide authoritative texts enhanced by introductions and notes by distinguished scholars and contemporary authors, as well as up-to-date translations by award-winning translators.
Marcus Tullius Cicero (106-43 bc), Roman orator and statesman, was born at Arpinium of a wealthy local family. Having been educated in Rome, by 70 bc he had established himself as a leading barrister and was beginning a successful political career. Cicero received honors usually reserved only for the Roman aristocracy and was one of the greatest Roman orators. Michael Grant has been successively Chancellor's Medallist and Fellow of Trinity College, Cambridge, Professor of Humanity at Edinburgh University, first Vice-chancellor of Khartoum University, President and Vice-chancellor of Queen's University, Belfast and President of the Classical Association.