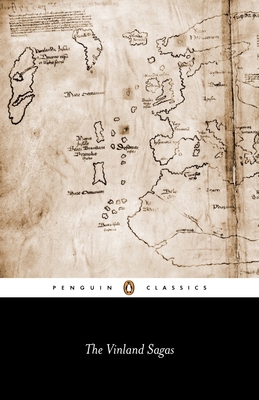 
In Stock—Click for Locations
The bestselling saga of Eirik the Red, Leif the Lucky, and the first American explorers

The all-time bestselling of the sagas in Penguin Classics, The Vinland Sagas are published here in a vibrant new translation. Consisting of The Saga of the Greenlanders and Eirik the Red's Saga, they chronicle the adventures of Eirik the Red and his son, Leif Eirikson, who explored North America 500 years before Columbus. Famous for being the first-ever descriptions of North America, and written down in the early thirteenth century, they recount the Icelandic settlement of Greenland by Eirik the Red, the chance discovery by seafaring adventurers of a mysterious new land, and Eirik's son Leif the Lucky's perilous voyages to explore it.

For more than seventy years, Penguin has been the leading publisher of classic literature in the English-speaking world. With more than 1,700 titles, Penguin Classics represents a global bookshelf of the best works throughout history and across genres and disciplines. Readers trust the series to provide authoritative texts enhanced by introductions and notes by distinguished scholars and contemporary authors, as well as up-to-date translations by award-winning translators.
Magnus Magnusson is an Icelander who has been resident in Scotland for most of his life, and is well-known for his presentation of the BBC's Mastermind. He is also chairman of the Scottish National Heritage. He studied English and Old Icelandic at Oxford University.