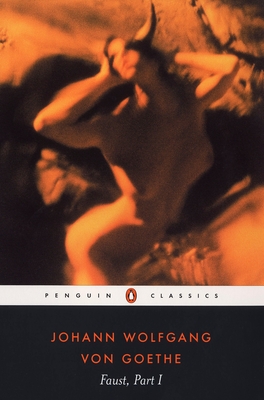 
In Stock—Click for Locations
Goethe’s Faust reworks the late medieval myth of a brilliant scholar so disillusioned he resolves to make a contract with Mephistopheles. The devil will do all he asks on Earth and seeks to grant him a moment in life so glorious that he will wish it to last forever. But if Faust does bid the moment stay, he falls to Mephisto and must serve him after death. In this first part of Goethe’s great work, the embittered thinker and Mephistopheles enter into their agreement, and soon Faust is living a rejuvenated life and winning the love of the beautiful Gretchen. But in this compelling tragedy of arrogance, unfulfilled desire, and self-delusion, Faust heads inexorably toward an infernal destruction.

A.S. Byatt's preface considers Goethe's lifelong relationship with the myth of Faust and its influence on modern literature. This edition includes an introduction by the translator, a chronology, suggestions for further reading, explanatory notes, and an addendum on the writing of Faust.

For more than seventy years, Penguin has been the leading publisher of classic literature in the English-speaking world. With more than 1,700 titles, Penguin Classics represents a global bookshelf of the best works throughout history and across genres and disciplines. Readers trust the series to provide authoritative texts enhanced by introductions and notes by distinguished scholars and contemporary authors, as well as up-to-date translations by award-winning translators.
Johann Wolfgang von Goethe was born in Frankfurt-on-Main in 1749. He studied at Leipzig, where he showed interest in the occult, and at Strassburg, where Herder introduced him to Shakespeare’s works and to folk poetry. He produced some essays and lyrical verse, and at twenty-two wrote Götz von Berlichingen, a play which brought him national fame and established him in the current Sturm und Drang movement. This was followed by the novel The Sorrows of Young Werther in 1774, which was an even greater success.

Goethe began work on Faust, and Egmont, another tragedy before being invited to join the government of Weimar. His interest in the classical world led him to leave suddenly for Italy in 1786 and the Italian Journey recounts his travels there. Iphigenia in Tauris and Torquato Tasso, classical dramas, were written at this time. Returning to Weimar, Goethe started the second part of Faust, encouraged by Schiller. In 1806 he married Christiane Vulpius. During this late period he finished his series of Wilhelm Master books and wrote many other works, including The Oriental Divan (1819). He also directed the State Theatre and worked on scientific theories in evolutionary botany, anatomy and color. Goethe completed Faust in 1832, just before he died.

A. S. Byatt, novelist, short-story writer, and critic, is the author of many books, including Possession, winner of the Man Booker Prize.

" One of those great works of literature into which a writer has been able to combine his ranging preoccupations and understanding as he worked."
-A. S. Byatt, from the Preface